Forcible removal: the confiscation of solar panels from a Bedouin community (by EA Sandra)

The treatment of Bedouin communities is one of the ‘big issues’ for our work. You can read some key facts about this issue from UNOHCA (the UN agency coordinating humanitarian efforts in occupied Palestine) at the end of this blog.

At around 4pm on April 1, the Jerusalem team received an alert that the Israeli Civil Authority was planning to remove 11 solar panels from the Bedouin community of Khan al Ahmar. The team had visited a few days earlier to talk to the community and to see the – by now famous – school made of tyres built by the community and Italian volunteers (see a report from EAPPI here). Firas, our driver and translator, contacted the community and confirmed the alert was correct and that the community wished us to come as quickly as possible.

We parked on the far side of the four-lane road and dashed across it in order to reach the community quickly.

We could see 3-4 Israeli military vehicles on the hill above the community, and one on the far side of the road. We were told that a vehicle was blocking access to the village and had prevented a UN team from trying to get access.

While Firas talked with men from the community, we were able to look at the panels, some of which had only been delivered that day, and were told that they had been donated by the United Arab Emirates Red Crescent Society. 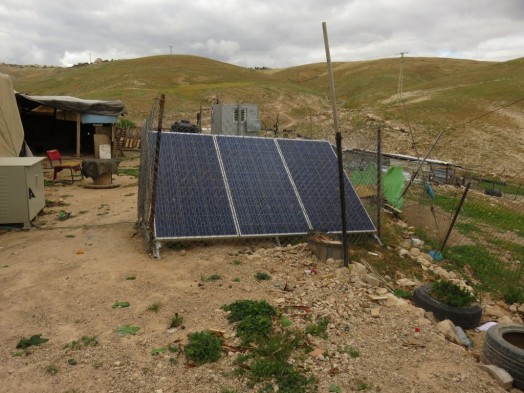 It is worth saying that such panels are critical for a community struggling to cope with the loss of grazing land for flocks. A regular power source means they can have a fridge in which to store dairy products that can then be sold at market. Electricity also means they can run a laptop and have access to lawyers.

Of course, during this time we were also being served coffee by the community. Nothing must stop hospitality to guests.

Soon, Ayman Kaloti from “Future for Palestine” arrived. His organisation had responsibility for installing the panels and he was phoning to try to get an injunction to stop their removal.

Journalists then began to arrive. First was a cameraman who hoped to sell his footage to AP or France 24. Next to arrive was a member of the Israeli human rights organisation, B’tselem, then a crew from a Lebanese TV station, and very soon after, the first person from Rabbis for Human Rights, Rabbi Arik Ascherman. The rabbi was extremely active in making calls. We were advised he was seeking to contact colleagues and lawyers.

We were told that the community had received advice to move the panels, and seek to obscure them from the security forces. The men of the community started to do this.

Another rabbi from Rabbis for Human Rights, Yehiel Grenimann, came. I soon discovered his Australian accent and introduced him to Joan, the Australian EA in our team. 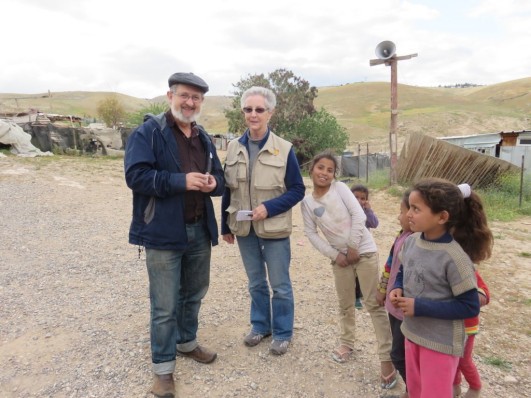 At around 5:40pm, the Israeli military started to drive down from the hill and from across the road. There were approximately six white vehicles. Meanwhile, the community leaders were being interviewed by the crew from the Lebanese television station and by others.

The United Nations team of two and other colleagues, who had been kept away on the other side of the road, also arrived. Shortly afterwards around 10pm Israeli police, mostly armed, came down from the main road.

At the same time another group came comprising Angela Godfrey-Goldstein (an Israeli peace activist) and colleagues who had been visiting a different Bedouin community. One of that group called out: “EAPPI are always here first”.

Representatives from the Norwegian Refugee Council (NRC) then arrived. The rabbis, the NRC and the UN sought to engage the senior police officer and seemed to be arguing the issue. We were advised that the police had not shown anyone a demolition order or any other order to legitimise the removal of the solar panels.

These discussions continued for some time but the UN representatives, NRC and Angela’s group were not permitted to enter the village proper where Joan and I were already sitting with the community men. We felt our presence fitted well with the EAPPI objective of “protective advocacy” as this was an incident we could share with not only friends but with high level contacts too. Such international interest has sometimes worked to the benefit of communities facing demolition orders or, as in this case, forced removal of something so seemingly harmless as solar panels.

A little time later, the police came across to ask us to move down to the roadside to be with the other internationals and agencies.

At this point Rabbi Arik sat on the ground and refused to move. The senior police officer let him sit.

For some time the Israeli army and police moved around. We assumed that they were looking for the panels. A large truck with a crane arrived by road.

There seemed to be little activity for some time but we were unable to see what was happening within the confines of the community itself because we were all at a distance as instructed by the Israeli police, and it was getting dark.

We began to see workmen dismantling and removing the panels. They were carried down the hill, then lifted by crane onto the truck. While he was waiting, the driver of the truck had been sharing his views on the rights of Israel to Jordan and Iraq.

At this point, Rabbi Arik began to quote from a commentary on the Exodus story which emphasised the human rights implications of that event in Jewish history. 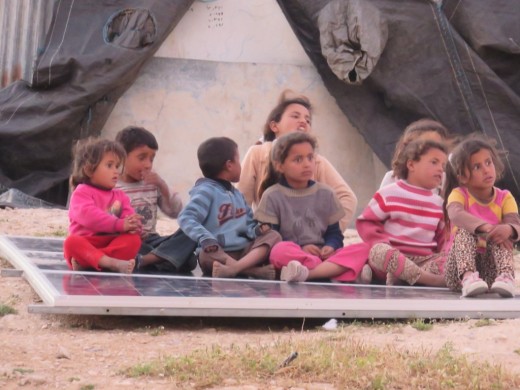 As most of the panels were being dismantled a group of small children sat on three of the panels. It looked as though they were staging a small person protest. The panels on which they were sitting were the last to be removed. The children had to be lifted physically from the panels by the police. The final panels and the boxes to which they were connected were all loaded onto the large truck.

As darkness fell, Rabbi Arik sang “Let my people go”, and the large truck with the panels departed. After the panels and the truck had gone the children continued with their protest. 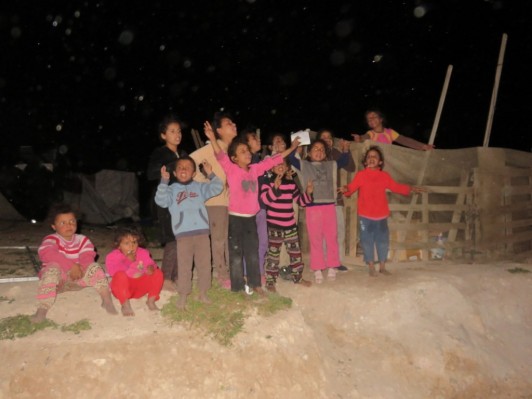 It was time to leave in darkness. Community leader Abu Khamis thanked EAPPI for our continuing support and presence.

I hope you might feel it worthwhile to learn more about the endangered Bedouin communities and support them. If you feel moved to take action, UNRWA, the UN agency providing assistance to refugees in occupied Palestine, has some useful information here on steps you can take to help stop the planned demolition of the Khan Al Ahmar community’s school.