“There is no country on this planet where it is forbidden to drink water, except Palestine.” 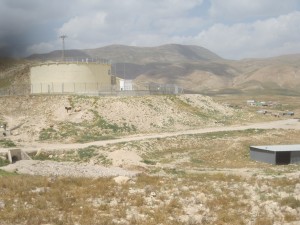 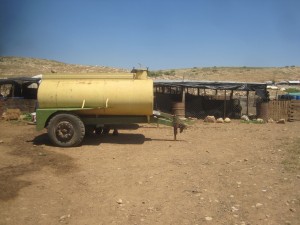 The Jordan Valley Team went to visit the Najoum* family of the small herding community of Mak Hul in Area C. The family must buy their water in tanks. Abu Ismail* stated that the family pays 170 shekels (£31) for 3 cubic meters of water for 7 family members(including 2 elderly parents, 2 children under 5 and a pregnant daughter in law) and a herd of several dozen goats and sheep. In the winter this amount of water can last a week, in the summer when temperatures can be higher than 40 degrees, the water will only last a day. 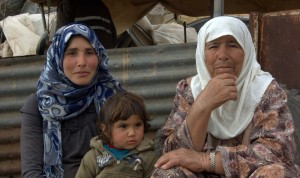 In discussion with our local contact, it became apparent that this daily cost is equivalent to one goat from the Najoum herd. The family may have to sell a significant part of their livestock in order to remain on their land. However, this decrease in animals gives more justification to the Israeli Authorities that the family do not need the land and must move. Their property is located in Area C which is under full control of the Israeli military; it is almost impossible for Palestinians to build on this area. 87% of the Jordan Valley is in Area C.

The Jordan Valley Team had a meeting with Abdullah Latif Khaled from Palestinian Hydrology Group who mentioned that there are 720 million cubic meters of potable water in the West Bank. Since 1967, Israel has controlled almost all freshwater in this area and since the creation of Areas A (Palestinian control), B (shared Israeli and Palestinian) and C (Israeli) Palestine was allocated only 20% of mountain aquifer and no new wells were created for the Palestinians. The remaining water must be obtained via Israel. Since 1967, the Palestinian population has tripled.

Only 31 percent of Palestinians in the West Bank are linked to the sewage network, with only one Waste Water Treatment Plant (WWTP) in operation, due to Israel’s refusal to grant the necessary permits or Israeli military security clearance for the construction and operation of sanitation and waste water treatment facilities and networks.

In 1982 ownership of the Palestinian water infrastructure was transferred to Israel’s national water company Mekorot, which is 50% state owned. This takeover meant Mekorot could connect Israeli settlements to the Israeli water network, and provide heavy government subsidies. The average water consumption of a settler in the Jordan Valley for household use is 487 litres. When taking into account agriculture usage this goes up to 1,312 litres per settler per day. 18 times greater than the average amount of water accessible to Palestinians in the West Bank.

In many communities, like Hammament Al Maleh, herders relied on local springs for their water needs. Now, as the springs lie too close to an Israeli settlement, the local Palestinians are not allowed to access the spring for their household or animal needs. This spring is now used by a handful of settlers for bathing.

UNOCHA reports “Over 70% of communities located entirely or mostly in Area C are not connected to the water network and rely on tanks of water at vastly increased cost. ”These portable water tanks must be purchased from Mekorot. These tanks are pulled in by tractors over rough terrain. Many Palestinian households spend up to 60% of income on water and electricity.

Given the building restrictions for Palestinians in Area C, many are not allowed to dig wells deeper than 91 meters which only reach salty ground water leading to limitation on agricultural produce. They also have limits on the width of irrigation pipes which can be laid. This has meant many Palestinian farmers have had to change the types of crops they grow to suit the water limitations. Many now grow Majool date palms which use salt water, this has also meant the Jordan Valley has become a mono-crop economy, providing 40% of the world’s Majool dates. This decrease in water has also led to many farmers reducing the amount of land they cultivate. Much of the land if left uncultivated for three years becomes property of the Israeli state.

Water pipe designated for Israeli use by 250 people. Credit: EAPPI/P.Hughes

In response to Israeli policy in Area C, Palestinian reactionary actions lie somewhere between defiance and survival; many Palestinians have had no choice but to break the rules and build water wells or lay pipes before the Israeli authorities find out. A local woman, Nai’me showed us the water pool her family built with the aid from a local organisation. Now, her family is better able to preserve and calculate water which they later can use to irrigate their farms.

Whilst sharing a strong Arabic coffee with my colleague Maria, she mentioned, “Our produce has increased so much that we now can afford to send our eldest daughter to university in Jericho”. If demolition orders were to come through, this would completely change the existence and future for this family.

Our team also visited a Bedouin family in Wadi Qilt, a fresh water spring, famed for its religious heritage, to discuss their experiences. The family were facing many issues from many directions. Not only were they not allowed to build a bathroom as their property lay within Area C but they were also facing issues to access a suitable water supply. The head of the family, who had lived in the valley for over 50 years, had seen changes in the springs in recent years. He had noticed that the springs had become more and more polluted to a point where the fish had died. These springs are a source of water for the Aqbat Jaber Refugee Camp outside of Jericho with a population of around 20,000. Due to his local knowledge, he clearly specified that this pollution was not coming from Israeli settlements but upstream from Ramallah in Area A, the de facto capital of the Palestinian Authority.

These comments chimed with the thoughts of many Palestinians we had met; they were under a double occupation. They were being forced off land by the Israeli Military and settlements and into the hands of the Palestinian Authorities who are seen as heavily corrupt.

* Names have been changed to protect those who may face further harassment from the Israeli authorities.

For now many Palestinian communities in Area C of the Jordan Valley are struggling to stay put on their land and are willing to break Israeli law, face water crisis and reduce their income than be forced to move into Areas A and B; into heavily populated communities and areas alien to them.

Access to drinking water is a basic human right. Prioritising illegal Israeli settlements over Palestinian communities with water supply must stop. We call on the UK Government to pressure Israel to put an end to this policy. Post election, please write to your local MP to push the new government to address this matter.