Ordered to stop building his home, on his land (by EA Theresa)

Jabril, a quietly spoken 50-year-old shepherd, has received two ‘stop work orders’. These are official Israeli documents saying he must stop building his residences – basically two walled tents and a sheep shelter. The order was delivered while he was out with his sheep, to his 28-year-old son who lives with him. All three structures have been up for three years at least and were moved after the last time the Israeli military demolished his home. The family of ten, who have lived in this village for several generations, will be affected by the loss.

One of Jabril’s tents that has a stop work order on it [Credit: EAPPI]

All of the structures on Jabril’s land that have stop work orders on them [Credit: EAPPI]

When we went to see Jabril in Qawawis, the small village where he lives in Area C (Palestinian land under the control of Israel), we were met by two of the women of the household plus its two newest members, two-year-old Saden and eight-month-old Mira. Mira was learning to roll over and making her first attempt at talking. She beamed at everyone around her and was happy to be left with us when her mum went off to make the drinks while we talked to Jabril.

When Jabril arrived we were waited on with a strong salty coffee and sweet sage tea. We spent a long time with Jabril, hearing his story about being brought up in the village, of owning some of the land in his own right and the rest with his brothers. They have the paperwork to prove it is their land. We heard of the continued Israeli settler problems they have had – sheep being grazed in their valley through their ripening barley and wheat, olive trees cut down, threats with guns, police inaction, demolitions. Much of the long list is documented – in Arabic or Hebrew and occasionally both. 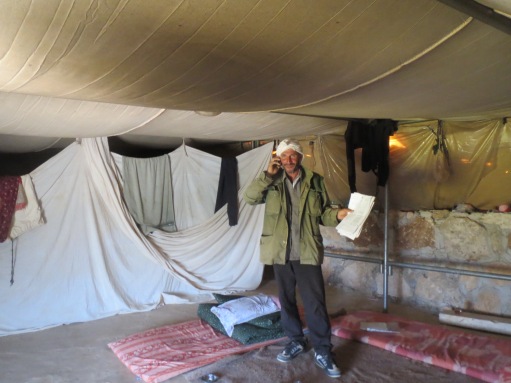 Jabril showing some of the documents proving his ownership of the land [Credit: EAPPI] 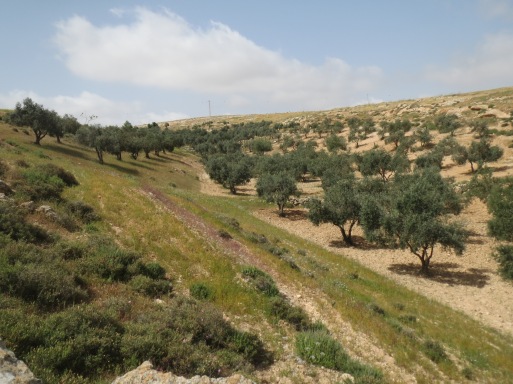 The valley on Jabril’s land where the settlers came to graze their sheep [Credit: EAPPI]

So what could we do for this family other than show them some solidarity? We tried to ensure that the family have a lawyer on side to fight the stop work order by phoning an organisation that could provide free legal advice and passing on Jabril’s number. I hope they kept their promise and rang him later that day. We also took pictures of all his paperwork in case it needs to be sent to a lawyer or copies are needed and we told him to phone us if the Israeli military turn up to demolish his home.

As we left, Jabril picked a large amount of sage for us to make tea with. His generosity was amazing from the little he had. And all through this Mira continued to smile and gurgle – not realising the danger that her family is in. Let’s hope she grows up in a world of greater peace and in freedom.

In conversation with Hamed Qawasmeh of the UN Commission for Human Rights we learned the following about planning in the Area C areas – like Qawawis – of Palestine:

– Master Plans are a planning scheme for each area or community. Once submitted to the Israeli authorities all demolitions are stopped until the plan is finalised in court.

– A Master Plan is put together by the Palestinian Authority with the local community to decide where the built up areas should be, where industry should be and what public infrastructure is needed eg schools, roads, clinics etc. The Plan involves meetings with the men, women and children of each community in an area.

– Plans can take two weeks to 1-2 years to prepare depending on the size of the area and the number of communities involved and the complexity of the situation.

– Once agreed by the Palestinians and submitted to the court the plan goes to seven committees in Israel including committees covering areas such as antiquities, the custodian for absentee property, and infrastructure.

– Often the Plans are rejected on technicalities and will go back and forth between the community and the court until these issues are resolved. However in all this time demolitions are on hold.

– Once agreed the Master Plan is the law for the area concerned and building is done to this plan.

– It can take six to seven years to get a Plan agreed  – but this is time when demolitions do not happen so the communities can at least have some ease.

Local communities hope that while the plan goes through court that the political situation will improve or be solved so that there is no need to have Israeli permission for any building work or infrastructure changes. Meanwhile it is a delaying tactic on Israeli action in the area concerned and also means local communities have discussed what development they need.

At present across Palestine there are only six agreed Master Plans and about 19 in the system.

You could ask to meet with or email your elected representative to show them this story and request that they raise the issue of planning and demolitions with the Israeli government.