Prayers, protests and incursions: rising tensions at the Al-Aqsa Mosque (by EA Sandra)

As readers will know, one of the duties of the Jerusalem team is a morning walk around the Old City to check that the seven gates to the Al-Aqsa Mosque Compound are open and accessible to Muslims wishing to pray.

This crucial Muslim site, the third holiest in Islam, merits a closer look. You will be familiar with pictures of the best known mosque on the site – it is a thing of great beauty.

The Dome of the Rock – part of the Al-Aqsa Mosque Compound [Credit: EAPPI/N.Oom]

First of all, even the terminology around the issue is complex.

In November, the Palestine Liberation Organisation – the organisation recognised by the international community as the legitimate representative of the Palestinian people – issued a statement which advised media representatives to use the term ‘The Al-Aqsa Mosque Compound’.

The Compound, it said, “is not a disputed territory and all other terms, therefore, are null and void”. The statement went on to say the Compound is “an internationally recognised part of the Occupied State of Palestine” and that Israel’s annexation of Jerusalem in the 1980 Basic Law on Jerusalem was not recognised by the international community.

Muslims should, by law, be allowed to enter the compound and pray at the Al-Aqsa Mosque Compound without restrictions.

However the reality is different. I have written before of the difficulties people can have in coming through Qalandia checkpoint to be able to come to Friday Prayers here, but there are also Israeli police at every gate to the Compound, and they can check ID cards, refuse admission, and remove ID cards which are essential for all aspects of Palestinian life.

From time to time the entry conditions imposed by the Israelis change. Restrictions on the age of men and women who can worship have recently been relaxed a little by the Israelis, but we have been told there is still confusion.

It is worth stating again that under International Law, the Israeli annexation of East Jerusalem, including the Compound, is illegal.

Jewish people believe that their most holy site is below the Mosque Compound and the site is therefore hugely contentious. Before the 1967 war the Compound was under Jordanian control. After the war the Israelis destroyed the Arab homes around the Western Wall which is just beside the Compound, and flew the Israeli flag from this Holy Islamic site. However, shortly after, the control of the Mosque was handed to the Islamic waqf Trust, which is independent of the Israeli Government. Nonetheless the site, which is policed inside, as well as outside, by the Israelis, remains hugely contested.

As has been widely reported, the Mosque Compound is also facing an increasing number of attempted incursions by Orthodox Jews. Jewish people, and tourists, are allowed to enter by the tourist gate, but there appear to be more and more attempts at entry through both the tourist and the non-tourist gates by Jewish men wishing to pray. At present there are real fears that the current Israeli government will seek to enable Jewish people to pray within the Compound. That would indeed be a flashpoint.

Last week on the morning walk the EAs saw this attempt at entry through a non-tourist gate.

An attempted incursion to the Compound [Credit: EAPPI/N.Oom]

A group of Muslim women regularly sit outside the above gate as a protest.

Some have been banned from the Mosque for their protest against the entry of the Jewish men.

Three of us EAs recently entered the Compound through the tourist gate (no EA jackets allowed here!). The security exists but does not seem forensic. The guy asked if I had any religious tracts – “no” – and then asked if I had any bombs, small or large. I felt “no” was the correct answer. Despite this cheery approach, the presence of riot shields at the top of the entry ramp tells a rather different story.

We entered the beautiful Compound – the site of mosques, and assembly halls, and schools.

Groups of women and men sat separately, and children played. Groups meet to study and to read the Qur’an. There was a substantial armed Israeli police presence.

A women’s study group in the Compound [Credit: EAPPI/A.Smith] 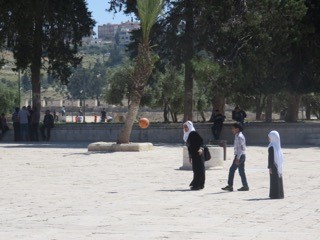 At play in the Compound [Credit: EAPPI/A.Smith]

The view within the Compound [Credit: EAPPI/A.Smith]

While we were there talking to a Muslim woman, we witnessed the entry of three Jewish men escorted by a security man and police. We noted they were shoeless – no shoes on a Holy site. We were told they were going to seek to pray in a quiet corner. The Compound suddenly resounded to cries of “Allahu Akhbar” in a clear protest.

Our Muslim friend said that these incursions made her so sad. So much had been taken from the Palestinians of East Jerusalem, and yet again they felt their Holy Place was under threat.  She said, apropos ISIS, “the West likes to think that is Islam. It is not. Islam, like all religions, has extremists, but Islam is a religion of peace. ISIS has nothing to do with Islam”.

At the 11am closure time for tourists, we began to leave the Compound.

We were behind an Orthodox Jewish man who was not happy about being asked to leave and was steadily photographing the police.

A Jewish man unhappy at being asked to leave the Compound at closing time[Credit: EAPPI/A.Smith]

If you would like to read about Friends of Al-Aqsa’s campaign to prevent increasing incursions into the Compound then please click here.  For more information, an article appeared on the Ma’an News Agency website just after I wrote this blog. It describes the arrest of three women detained after protesting against the incursions.

You will have noted how the women are standing up for their rights in terms of access to the Compound, so to continue on the theme of positive action by women in Palestine please look at the website of the Women’s Centre for Legal Aid and Counselling and consider learning more about their work (please note, this is not a request for donations, just for your interest).