Do not forget Gaza (by EA Sandra)

Last week we visited the Israeli village of Netiv Ha’asara near the border with Gaza and met with Roni Keidar who lives there. 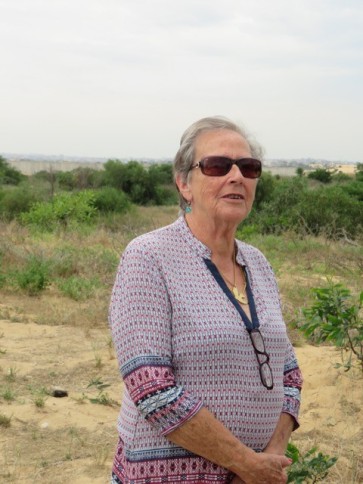 You can just see Gaza behind Roni, and the photo below shows the wall and Gaza behind. It is very close indeed. 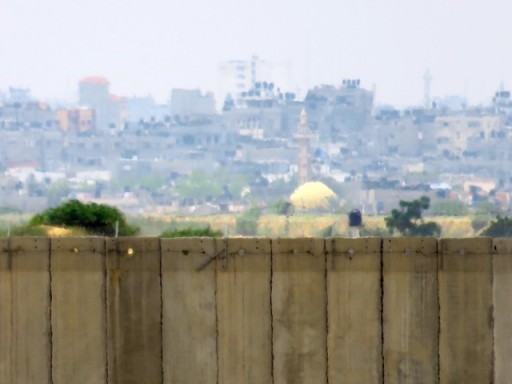 Roni told us of her life in the village. The families all own a piece of land and grow flowers and vegetables on the fertile soil. Every home has a bomb shelter. There are shelters by the roadside, and by the bus stops where children wait. People have 15 seconds to get to one after a warning siren. She told us of life of fear in the village, with constant sirens, but she stressed that they lived within the recognised international boundaries of Israel, and therefore they would not move.

Other Voice campaigns for peace, and believes violence cannot be the answer. Roni told us that despite the closeness of Gaza to her community, she believed the Gaza blockade should be lifted, so that the people of Gaza could begin to have normal lives, rather than being trapped within the borders with nothing to lose. She acknowledged the risk to her community if that happened, but said they were at risk all the time anyway. She stressed that to support a Palestinian state was not anti-Israeli.

The photo below shows the main checkpoint to Gaza. This checkpoint was seen often on TV last summer.

EAs do not work in Gaza but our talk with Roni reminded us that it is indeed a part of Palestine, and the events of last summer certainly impact on the people in the West Bank and Israel and our work, so it is good to look at what is happening there.

This graphic, taken from an article comparing Gaza to various cities around the world, shows the area in relation to London.

“On 7 July 2014, a humanitarian emergency was declared in the Gaza Strip, following a severe escalation in hostilities, involving intense Israeli aerial and navy bombardment and Palestinian rocket fire. Hostilities de-escalated following an open-ended ceasefire which entered into force on 26 August. The scale of destruction, devastation and displacement during the 50 days of conflict is unprecedented in Gaza, since at least the start of the Israeli occupation in 1967. The humanitarian impact of these hostilities comes against a backdrop of heightened vulnerability and instability in Gaza. In the aftermath, the humanitarian community is working hard to respond to the needs of all 1.8m residents of the Gaza Strip while advocating for transformational changes, including a lifting of the seven-year-old blockade imposed on the Gaza Strip.”

“Six months on from 50 days of conflict, life in Gaza remains shattered and the hope amongst families is dwindling.”

“We need a home, not promises,” is one quote from a resident of Gaza in an opinion piece by UNRWA spokesperson Chris Gunness. His article, published in The Observer on February 22, reminds the international community of its commitments and obligations to the people of Gaza. He writes:

“People in Gaza need urgent change: they need all parties to the conflict to abide by their obligations under international law; the removal by Israel of all obstacles to the enjoyment of human rights; and the immediate lifting of the blockade, allowing imports and exports, a necessary step to enabling economic recovery. The rockets fired from Gaza must cease. There is an urgent need for Palestinian unity, so that the Palestinian Government of National Consensus can assume its governance and security functions in Gaza. The Middle East Quartet should exert effective political pressures, as the time for humanitarian action alone is long past.”

The article also reiterates that despite the tragedy of the current situation, change is still possible: “Gaza is not a natural disaster. It is man-made, the result of deliberate political choices. Different choices must now be made.”

The CEO of the British charity Medical Aid for Palestine has said:

“The world is shutting its eyes and ears to the people of Gaza when they need it most. Reconstruction cannot happen without funds, but money alone will not be enough. With the blockade in place we are just reconstructing a life of misery, poverty and despair.”

Gaza has recently been very much in the Israeli news with a report published by a group of Israeli ex-soldiers called Breaking the Silence. The report gives testimonies from Israeli soldiers who took part in what the Israelis call the “Gaza War”.

Please do look at these testimonies.

Future blogs from me will be about our work in East Jerusalem and the West Bank, but I hope you do not mind this chance to remember Gaza as a part of Palestine, as we have been asked to do by an Israeli peace activist.