One morning, two demolitions in East Jerusalem (by EA Sandra)

On June 2, the Jerusalem team received a UN alert about two house demolitions, so I and Swedish EA Ninna went with our driver and translator to establish what was happening. The first demolition was just outside the Old City walls in the nearby district of Silwan in East Jerusalem. We met the Abu Khaled family. The head of the family, Imand, told us that soldiers had arrived at 4am and demolished a house the family had just finished building, but not yet occupied.

The extended family of 26 lived in another house on their land, and had been there since 1961. That house is on the right of the picture above. They told us that when the soldiers had arrived, the 23-year-old son of the family, Hashem, had gone out to the property being demolished to talk to the troops and ask them to stop. There was a scuffle and Hashem was arrested. 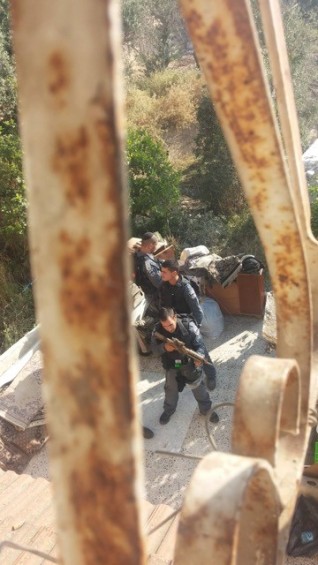 At that point, we were told the troops had used tear gas, and we saw broken windows in the house which the family said were from the tear gas canisters. 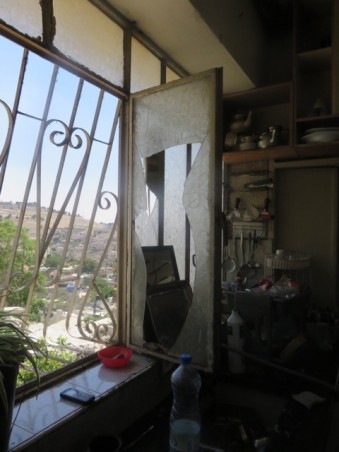 The broken window in the family’s house [Photo: EAPPI/A.Smith]

At 10.45am when we arrived, people, including the grandmother, told us they were still suffering from the effects of the tear gas.

One family member still suffering from the effects of the tear gas [Photo: EAPPI/A.Smith]

As well as demolishing the property, the forces had dug up the garden and destroyed most of a small olive grove. Here one of the little boys of the family is trying to replant an olive branch. 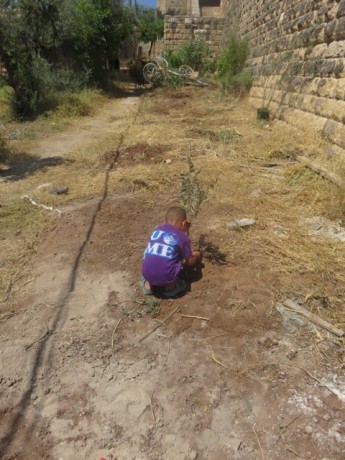 There was obviously much distress, including a 17-year-old who had to go to school to try to sit a key exam after the demolition. She told us the school had found a separate room for her and tried to help her, but she did not know how the exam had gone. She has another two days of exams to do.

Despite the distress, broken glass and disorder, we were, of course, given coffee.

The small children and the older women were in tears. We sought to explain our role and gave the family contact details for the international medical charity Medecins Sans Frontieres who offer a counselling service. We promised to report the demolition to the relevant UN bodies and other agencies which might be able to offer practical help. As we left, the family were being interviewed by the media.

Members of the family being interviewed by the media [Photo: EAPPI/A.Smith]

The property was demolished because the family had no building permit. In East Jerusalem, which according to the international community has been illegally annexed by Israel, Palestinians have to apply to the Israeli authorities for a building permit. This family had applied, but had been rejected.

Every country rightly has planning laws. Here, Silwan is occupied, which means the occupier has a responsibility under the Geneva Conventions for the welfare of the civilian population. Facilitating development is one such responsibility but, as identified below by the Jerusalem-based Society of St Yves Catholic Centre for Human Rights, the difficulties in obtaining permits leads to Palestinians building without them, an activity which is defined by Israel as illegal and thereby justifying the demolitions.  In any case, it is difficult to imagine many places where the demolition of an “illegal” house on private land would require soldiers and tear gas at 4am.

“In East Jerusalem most of the demolition orders were issued because of so called “illegal” constructions, which means that the building was constructed without a permit by the Israeli authorities.

“But building permits for Palestinians living in Jerusalem are nearly impossible to obtain. Permits are needed in order to build on one’s land or in order to add a floor or extension to an already existing home. Statistically only five percent of all permit requests by Palestinians are approved by the authorities and the average time period for approval is 5-10 years. This, when compared with the fact that building permits for settlers are approved at a rate of 90-100 percent, reflect the severity of the situation. Additionally financial hurdles are put in place; permits typically cost around 30,000 US dollars (mostly administrative fees). This amount must be put in perspective; salaries are low and almost 70% of the Palestinian population in East Jerusalem lives below the poverty line.

“The only solution for Palestinians has therefore been to build illegally on land which they legally own, in order to accommodate their growing residential needs. The demand of housing units is more than urgent: The Palestinian population in East Jerusalem grew from 60,000 in 1967 to around 200,000 nowadays.”

“We have tried to do everything correctly. They turned down our application because our land was a garden, now they have destroyed the garden. We have the land , we need more space for our family. Life here is impossible. We have had tear gas, and my son has been arrested, because of a wish to build a home.”

The second demolition we were alerted to was near St. Georges Cathedral, on the other side of Jerusalem’s Old City. When we arrived we were turned away by the soldiers. 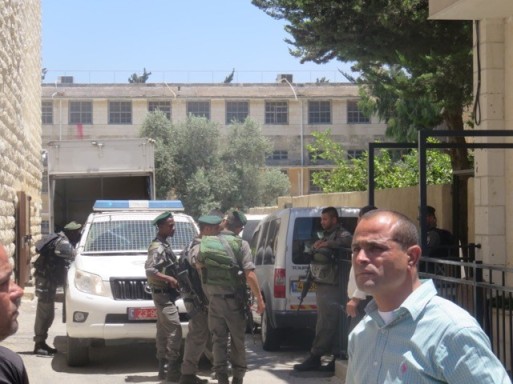 Soldiers at the demolition near St. George’s Cathedral [Photo: EAPPI/A.Smith]

Shortly after our arrival, the contractors who had been carrying out the demolition work were escorted out by the soldiers, and then drove away in their van surrounded by police cars. The soldiers had tear gas guns to the ready, and we were unnerved to see a soldier with a grenade in his hand. We chose not to try a photo.

We were then able to enter the property. A new area on the roof had been totally destroyed. We met Rafeek Najeeb Salyah, and his sister Jawher. 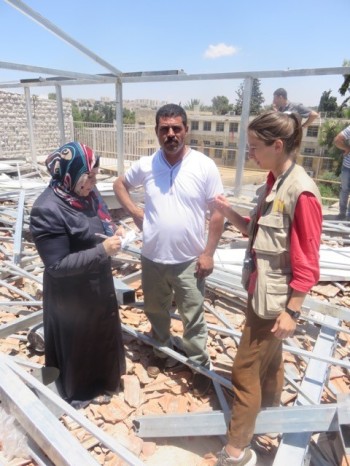 Jawher spoke some English and told us the soldiers had come at 6am. She said the wood in the roof had been rotten, and they had built a structure on the roof to protect the house. They had not used concrete as they saw it as a roof space, and did not think they needed a building permit. The destruction was quite complete. There were piles of very old roof tiles. Some of the stairs had also been removed, which made access tricky for us.

The area where some of the stairs had been removed [Photo: EAPPI/A.Smith]

We were invited into the house to meet the women of the family. During the demolition, the children had been sent to a neighbour, but they had returned to scenes of some chaos.

Despite the palpable distress and tears of the adults and the children, we were again offered coffee.

Mrs Salyah said: “Please help us, we have borrowed money to make these repairs and have a space on the roof, now we will have to pay for this demolition and to remove the rubble, and how can we live?”

These demolitions, and there are many, should be seen as breaches of International Law. These homes are in territory which is deemed as occupied under International Law. As such, Article 53 of the 4th Geneva Convention states that: “Any destruction by the Occupying Power of real or personal property belonging individually or collectively to private persons, or to the State, or to other public authorities, or to social or cooperative organizations, is prohibited, except where such destruction is rendered absolutely necessary by military operations.”

To learn more about the fight against house demolitions, please visit the website of the Israeli Committee against House Demolitions, an Israeli human rights organisation dedicated to working on this issue.