Resisting settler attacks in Bir al’Idd: one family’s determination to stay on their land 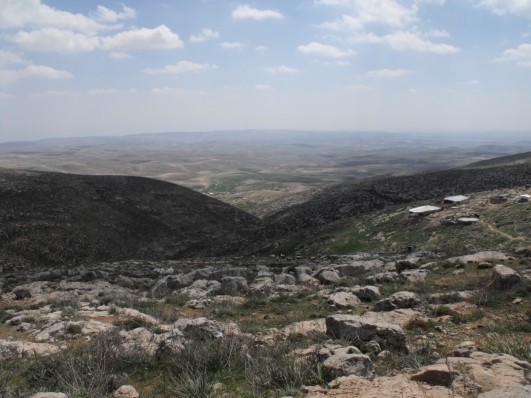 Looking out over the land of Bir al’Idd [Photo: EAPPI/T.Mansbridge]

In 1999, Bir al’Idd villagers left their homes after being driven out by attacks from settlers from the illegal outposts of Mitzpe Yair and Nos Nesher. The settler violence included preventing the villagers getting basic supplies and livestock in and out of the village. The families went to live in the city of Yatta.

Following a long legal case supported by Rabbis for Human Rights, the villagers were given the legal right in 2009 to return to Bir al’Idd ten years after they evacuated. But settlers from the nearby illegal outposts – with the help of the army – continue to harass the villagers and although at first four families did initially return, only one family remains.

Ziad Mahmad Younis, known as Abu Tariq (the father of Tariq), and his wife Ratiba live permanently in the village. Their school age children live in Yatta in the week in term-time and return to help on the farm during the weekends and holidays. The older children, now adults, live in Yatta and the US.  One older son, Tariq, works in Ramallah in the week and returns each weekend to live in the village.

Living in an isolated spot away from others, this family is particularly vulnerable to settler attacks. Their nearest neighbours are the illegal outposts, one of which, Mitzpe Yair, is expanding. 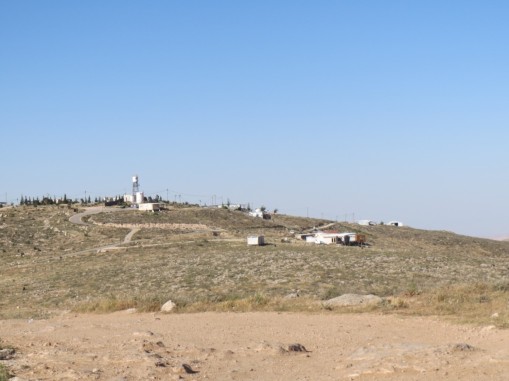 The next nearest neighbours are in the Palestinian village of Jinba, the main road from which comes near the village.

Some other families originally from the Bir al’Idd still farm in the area. They also face harassment from the settlers.

International support comes mainly in the form of protective presence. It is hoped that if the family stays others will follow.

Having been born and brought up in the village, Abu Tariq says he did not like living in Yatta and found that his health was worse when living in the city. He enjoys living out at Bir al’Idd even with all its deprivations. At least he has fresh air and has space.

Internationals drop in regularly to the village when they are able to, and they often pop by to say hello and check out how things are going when passing into the Masafer Yatta, (an area of the South Hebron Hills that is designated as ‘Firing Zone 918’ by the Israeli military).

Our group have visited several times during our stay. On the first occasion we found Abu Tariq and the older boys building a house. They were building on the site of old village houses hoping this would mean that the new homes would be safe from demolition (as permits to build are almost impossible to obtain). Even so, on a second visit we were told that the Israeli security forces had told them they could not put a proper roof on any of the buildings! But they continue to build so that the older children can return home to bring up their families when they are ready to do so.

Abu Tariq and his sons working on their new buildings [Photo: EAPPI/T.Mansbridge]

Each time we visit we are given typical Palestinian hospitality of tea and often lunch. The tea varies with the seasons and Abu Tariq explained the medicinal qualities of the wild herbs that they gather around the hills and valleys near their home.

On another visit we went with the two younger boys who were weeding the barley fields early in the season. By the time we arrived, the boys, about 12 and 16 years old, had already worked half the field by hand in the hot sun in the shadow of Lucifer’s Nest and the Nos Nesher illegal outpost and settlement.

Often this is when the family is most at risk when away from the village and in small numbers. So although we helped with the weeding, our main task was to be a protective presence, watching out for settlers.

After a lovely lunch and a rest we joined the boys as they shepherded their sheep up to their land near one of the illegal outposts where there is grazing.

Abu Tariq’s son herding their sheep under the shadow of the illegal outpost [Photo: EAPPI/T.Mansbridge]

Abu Tariq and farmers from Jinba have had sheep stolen from them in this area by settlers. If the Israeli police or army are present they most likely take the side of the settlers and the sheep are often taken back to one of the illegal outposts. On our visit in April we were told of a sheep that had been stolen from a Jinba herder whilst the police and military looked on – we saw the video of the events as Abu Tariq has a video camera provided by the Israeli human rights organisation B’Tselem to gather evidence. In this case the sheep escaped and the next day returned to its farm in Jinba!

When asked what he does when approached by settlers, Abu Tariq says, “I just walk away. This is my land, I will not leave but I will not fight”. His main protection is the video camera and his families’ steadfastness to stay on his land but visits from EAs and others also show the settlers that the family is not completely isolated and this can sometimes deter acts of violence.

The oldest son, Tariq, stated that he would return to the village when he settles down with a family as it is his home and he wants his family to grow up here.

The family sustains itself by farming sheep, goats and chickens, and from harvesting fruit trees and gathering herbs to sell in the markets.

Baking goods to sell at the market [Photo: EAPPI/T.Mansbridge]

This hard-working family hopes to stay in their village and that others will eventually feel safe to return.