My friends in Susiya should not have their homes destroyed

This blog was originally posted here on the website of Trócaire, one of EAPPI UK & Ireland’s official partners. Emmet Sheerin served as an Ecumenical Accompanier with EAPPI in 2012 and now works as a Campaigns Officer for Trócaire.

If your home was set to be demolished and your village wiped off the map, what would you do? Where would you go? How would you live?

These are the questions being asked right now in Susiya, a rural Palestinian community in the West Bank. The village of Susiya, with a population of around 340, is in imminent threat of demolition by the Israeli military.

In 2012, I spent five months working in the West Bank with the Ecumenical Accompaniment Programme for Palestine and Israel (EAPPI), documenting and reporting human rights abuses against vulnerable Palestinian communities stemming from Israel’s occupation of Palestinian territory. On numerous occasions during this period I visited Susiya, where I got to know many of the people living there and to experience daily-life under the control of an occupying military force.

In many ways Susiya is on the front line of the Palestinians’ struggle to exist on their own land and to resist the suffocating expansion of Israeli settlements throughout the West Bank. Like many Palestinian communities in the West Bank, Susiya has lost much of its land and water resources to Israeli settlements (which are illegal under international law), impacting greatly on people’s ability to live with dignity and to provide for their families. 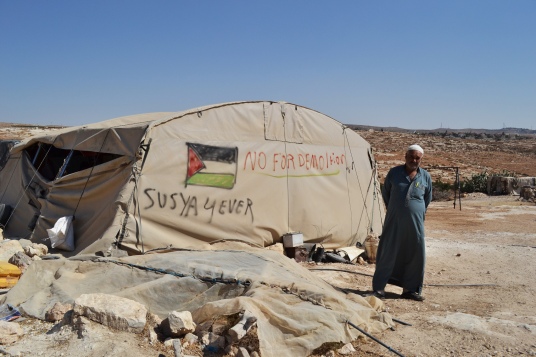 The people of Susiya have lived in constant fear of their village and homes being demolished [Photo: Eoghan Rice/Trócaire]

In addition to the loss of vital natural resources, the people of Susiya live in constant fear of violence and harassment, not only from the Israeli military but also from Israeli settlers living nearby. The most vivid memory of my time in Susiya is interviewing a local woman who had recently been released from hospital after being severely beaten by Israeli settlers. She had been herding sheep on her family’s land close to the village when she was attacked by seven men armed with metal bars.

What stuck with me most from this interview weren’t the bruises on her face or the strain in her voice, but the sight of her young daughter sitting in the corner of the tent, examining the fractures in her mother’s x-ray.

If you are not familiar with the ongoing situation in the West Bank, you could be excused for thinking that incidences of land seizure or violence against Palestinians are isolated or random acts.  However, the hard reality is that the ongoing harassment, discrimination and human rights abuses against Palestinian communities are inextricably linked to a campaign to forcibly displace Palestinians from their land.

From my experience working in the West Bank, Israel’s policy of mass demolition against Palestinian homes is perhaps the most obvious ploy in this campaign of forced displacement. Susiya, like many other Palestinian villages, lies in ‘Area C’ of the West Bank – an area controlled completely by the Israeli military, and comprising roughly 60 percent of the entire territory. Here, Palestinian communities must apply to the Israeli Civil Administration (i.e. the Israeli military) for permits to carry out any type of physical construction. However, the fact is that in almost all cases, applications made by Palestinians are rejected by the Israeli authorities. Nevertheless in order to meet the needs of their families and communities, Palestinians are forced to build in their villages without Israeli permission, leading to the mass demolition of homes, schools, medical tents, animal shelters and water cisterns.

Sadly, the village of Susiya now faces imminent demolition. On May 5, the Israeli High Court gave the military the go ahead to demolish the village, despite an injunction request being made on behalf of the community by Trócaire’s Israeli partner organisation Rabbis for Human Rights.

While the demolition of Susiya seems highly likely, we cannot let it be an inevitability. Now more than ever, international diplomatic pressure on Israel is essential – particularly given that legal avenues to stop the demolition appear exhausted.

Many EU diplomats have already visited the village in solidarity. This is a really positive development. EU diplomatic representatives to Israel, including Ireland, should continue to make every effort to help stop the destruction of this Palestinian community.

Click here to find out more of the background to this issue. You can also find information on how you can write to your TD (in Ireland) or MP (in the UK), using our template email or letter, and ask them to take urgent action to stop the demolitions.

If you are on Twitter, please use the hashtag #SaveSusiya to show your support.

Please note: the views expressed in this blog do not necessarily reflect the views or policies of EAPPI UK & Ireland or its partners.