Remembering who called us to this land: the Christians of Palestine and Israel

As my three months as an EA in Jerusalem comes to an end, and I set off for a more rural Palestinian setting until the end of July, I thought it timely to recall that we were here under the auspices of the World Council of Churches, and in response to a call from the churches of Jerusalem.

A few Sundays ago, a group of us attended the morning service at the Lutheran Church of the Redeemer in Jerusalem.

EAs attending the morning service at the Lutheran Church of the Redeemer in Jerusalem [Photo: EAPPI/S.Horne] 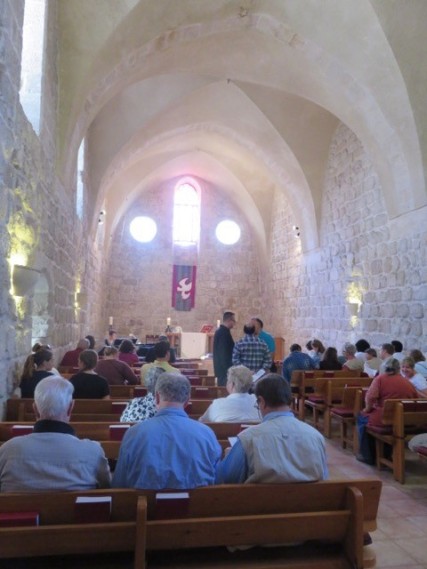 The Lutheran Church of the Redeemer in Jerusalem [Photo: EAPPI/S.Horne]

We were moved by the sermon delivered by the Reverend Carrie Smith. She seemed to sum up the aspirations of our programme in Palestine and Israel.

Here is the beginning of her sermon:

“Some days, it feels like nothing will ever change.  I read the other day that 82 percent of Israelis fully expect another war with Gaza in the coming months. Same suffering, different summer. Same wall, same illegal occupation, same dialogues happening with the same people, with no different outcome. Friends in the States, especially African-American friends, have lamented how tired they are of the same racist story coming out of a new city every day. Same human brokenness and sin, different context. This unrelenting status quo of human suffering means Jesus’ parable about the mysterious growth of the kingdom—and the sleeping farmer—is especially meaningful for us today.

“Jesus said, ‘The kingdom of God is as if someone would scatter seed on the ground, and would sleep and rise night and day, and the seed would sprout and grow, he does not know how’. The parables of Jesus use familiar images to reveal unfamiliar and challenging ideas. In this case, the challenging idea is that the growth of the kingdom happens only by God’s power, and in fact is happening right now. Something is happening, something is germinating, soon the change will come, although all we see now is a pile of dirt. This is a message of hope, an encouragement to disciples who wonder why, if the Messiah has already come, we don’t see more evidence of the promised kingdom of love, peace, justice, and abundance for all.

“There is a history in the church, however, of interpreting this parable as a license to just ‘let go and let God’ when faced with the injustices of our broken world. There is unfortunately a tradition of reading these words of Jesus as a call to quietism and calm, a bucket of water to drown the flames of passion and to cool the agitators for justice, revolution and change. The farmer in this parable, after all, is just having a good nap while waiting for the kingdom! The growth not only happens by God’s power alone—the farmer seems completely irrelevant to the story! Therefore, ‘Don’t worry, God’s got this, it’ll all make sense when we get to heaven’ has been the message of many a preacher.

“This is a convenient interpretation, especially for those whose lives and privilege will be disrupted by the coming of God’s kingdom. It allows us a theological excuse for doing nothing right now, and biblical justification for maintaining the status quo. God will take care of it, in God’s time.

“One of the most memorable challenges to this quietist interpretation came from the Rev. Dr. Martin Luther King, Jr.

“In his Letter from a Birmingham Jail he quoted a message he had received from a ‘white brother in Texas’, which said, ‘All Christians know that the colored people will receive equal rights eventually, but it is possible that you are in too great a religious hurry. It has taken Christianity almost two thousand years to accomplish what it has. The teachings of Christ take time to come to earth.’

“To which Dr. King famously responded, ‘Human progress never rolls in on wheels of inevitability; it comes through the tireless efforts of men willing to be co-workers with God, and without this hard work, time itself becomes an ally of the forces of social stagnation. We must use time creatively, in the knowledge that the time is always ripe to do right’.”

You can read the rest of the Rev Carrie Smith’s moving sermon here.

The concerns of Christians here have been heightened by the recent torching of the Church of the Multiplication of the Loaves and Fish at Tabgha, near Tiberias.

This editorial from the Israeli newspaper Haaretz looks at the reasons behind the spate of recent attacks on churches and mosques.

And this article from the Guardian tells the story of the vanishing Christians of the Middle East, including those in the Holy Land.

If you know anyone coming to do a pilgrimage in this land, please ask them to try to speak to Palestinian Christians – the “living stones” – during their visit as well as looking at the beautiful churches and historic sights. That is a real way to help Christians here. For more information, you can read this guide on visiting the Holy Land written for Christian pilgrims by a group of theologians from around the world and tourism industry professionals.