“Many students started to shake”

By Ann and Elizabeth, EAs in Southern West Bank.

Saja is an articulate and thoughtful 11 year-old, immaculately turned out in her brownie uniform, despite living in very basic accommodation in Area C, where there is no running water.  Her ambition is to be a mathematics teacher, and her class teacher describes her as a bright pupil who could well achieve this.  Mohammed is in Grade 6 and wants to become a doctor.  Saja said to us: “I want you to tell all the organisations of the world that we have a right to have a school here and to study in it.”

The children do, indeed, have a right to education, enshrined in the following: article 50 of the 4th Geneva Convention, article 26 of the Universal Declaration of Human Rights, articles 28 and 29 of the Convention on the Rights of the Child, and article 13 of the International Covenant on Economic, Social and Cultural Rights.

EA with Saja and Mohammed. Photo:E.Brightwell

Up until the end of the last school year all the children in their village faced a 4 km walk across rough country to school, passing close to the “outpost” of Avigayil, inhabited by Israeli settlers with extremist views.  “The settlers follow us with stones and sometimes throw the stones. “  Their only alternative was to stay with relatives in the town of Yatta, in order to attend school there.  Neither option was attractive for children of primary school age.

The opening of a new primary school is normally an occasion for celebration.  In the small Palestinian village of Shi’b al Butun a new school opened on 1st September 2015, with 28 pupils in grades 1-6.  More are expected to enrol once the school is fully established. 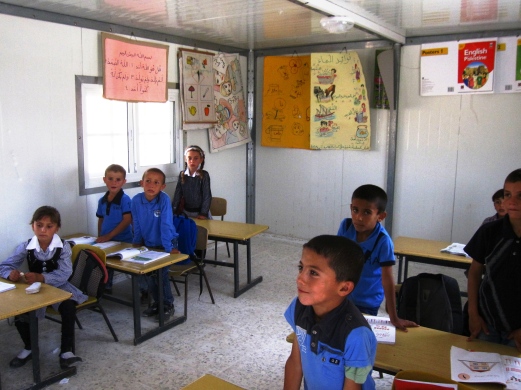 Children in grades 3-4 in the classroom of the new school. Photo:EAPPI/A.Davison

Saja and friends in the entrance to their classroom Photo: EAPPI/A.Davison

On the second day of the school year they were all very shocked when an Israeli official visited, to deliver a “stop work order” that prohibits the completion of the playground and toilets.  As Saja pointed out, “[Israeli] schools have swimming pools and everything.  They don’t want us to have a playground.” 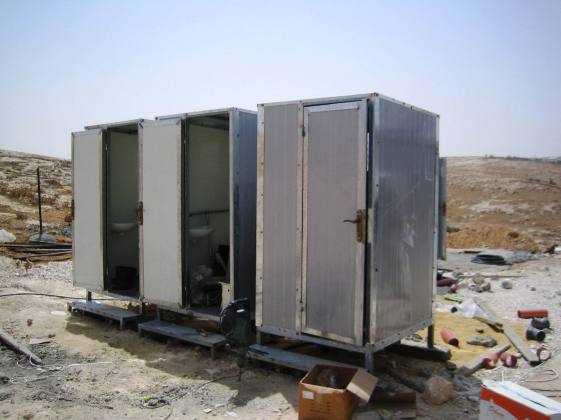 The official also gave the head teacher an ultimatum that he must get a planning permit for the school: a permit has been applied for, but only 1.5% of such applications are ever approved.  Without a permit the school itself will be served with a demolition order.  (Figures relate to 2010-2014 from a UN OCHA report, Under Threat: Demolition Orders in Area C of the West Bank.)

Why was an administrative visit of this type so traumatic for the children?  Because the official was “protected” by three Israeli soldiers, armed with machine guns.  The teachers filmed the episode, and we watched it.  As Saja said, “they pointed the guns and we know they don’t want us here.  We were very frightened.”   Their head teacher told us that he requested the soldiers wait outside the school grounds (at a distance of perhaps 25 metres), but was told that he was perceived as a threat (surrounded by his pupils, and in his shirt sleeves).  He added that it is against Israeli law for soldiers to enter school premises in this way.  After they left the children were shaking, and learning is still disrupted a week later.

This is military occupation in action.  At worst the school is demolished; at best the children’s education and psychological well-being are undermined.

If/when a demolition order is issued for the school, the next question is: how much will the EU protest about it?  Will they find it acceptable that a building donated for humanitarian motives, to fulfil the basic right for education, is simply destroyed?  Are we as EU taxpayers willing to acquiesce to this? 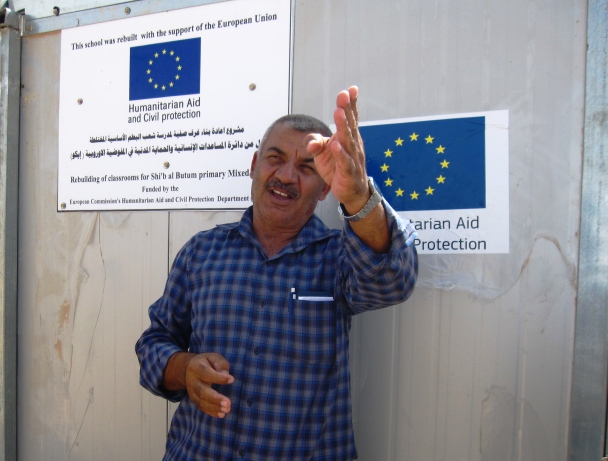 Contact your MEPs and tell them that the EU should be much more vociferous about demolition of EU-donated humanitarian aid, and that compensation should be requested for all damages incurred.

If you’re in the UK you can find your MEP here: Writetothem.com

If you’re in the Republic of Ireland you can find your MEP here: Your MEP