Where have all the flowers gone?

For many, the offering of flowers is a powerful symbol of peace. There are few more powerful images from the peace movement during the Vietnam war than those of activists placing flowers in the barrels of soldiers’ guns. Yet here, even their delicate beauty cannot escape the brutality of occupation.

Said is a middle aged man from Khallet Sakariya, a small village near Bethlehem. He has lived there all his life. Over the past few years he has grown flowers and plants in his garden which he sells for a modest income. But now, his garden lies in ruin. His flowers torn to shreds.

Early one morning, the Israeli military came with a bulldozer and dug up his flower bed. Months of work and investment was destroyed, contrary to international conventions which protect the livelihood needs of people living under occupation. When EAs asked Said what he would do now he could only reply, “I don’t know”. 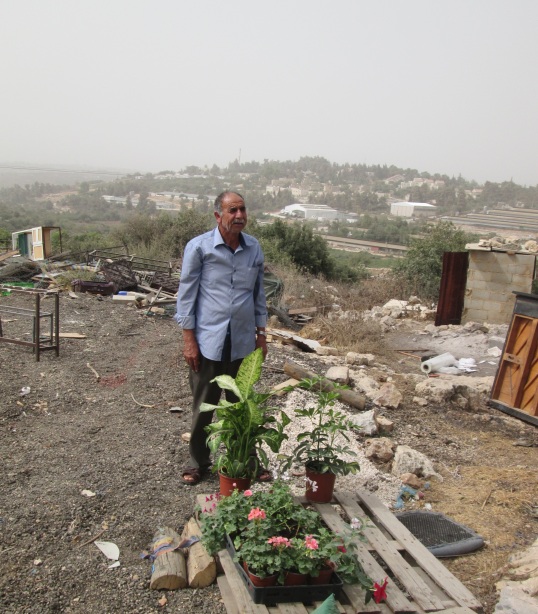 Said with the remnants of his flowers in Khallet Sakariya [Photo: EAPPI/E.O’Driscoll]

Khallet Sakariya is entirely situated in Area C. This means that although accepted by Israel through the Oslo Accords as part of an eventual Palestinian state, the village remains under full Israeli civil and military control. It is about 4 kilometres outside the 1949 Green Line, the internationally recognised Israeli-Palestinian border, but nonetheless finds itself surrounded by the large Israeli settlement bloc of Gush Etzion. From Said’s home, Israeli settlements, illegal under international law, can be seen on all sides and if the planned construction of the separation wall takes place, Said and his community will find themselves stranded on the Israeli side.

A map showing Khallet Sakariya surrounded by the settlements (in purple) [Source: UNOCHA]

Said told EAs that, “we have been punished ever since 1967”. This is confirmed by the local mayor, Abu Ibrahim, who tells us that no-one gets a construction permit here and demolitions are all too common. Some families cannot even get electricity access, while the surrounding illegal settlements, mere metres away, are abuzz with every modern convenience imaginable.

“They want us to leave,” Abu Ibrahim tells us and their plan seems to be working. Khallet Sakariya is slowly shrinking. Many people cannot take the sheer pressure of life here and there is nowhere for the next generation to live. Said’s flowers are but a symptom of the problems faced by a village that is disappearing under occupation.

While the particular stress faced by Khallet Sakariya has been noted by United Nations Office for the Coordination of Humanitarian Affairs (UNOCHA), the community is far from alone in the problems it is facing. Area C encompasses over 60% of the West Bank and over 85% of the Bethlehem Governorate. B’Tselem, an Israeli human rights organisation, report that over 90% of building permit applications in the West Bank are rejected by the Israeli Civil Administration, an arm of the Israeli military. A 2011 UNOCHA report clearly states that the restrictions imposed mean that “the natural growth and development of communities in Area C are denied”. It further cites discriminate demolition of Palestinian properties in Area C.

This week marks the World Council of Churches World Week for Peace in Palestine and Israel which calls for the building of “bridges not walls”. It aims to draw attention to the suffering under occupation of villages like Khallet Sakariya. Now the flowers are gone and unless something changes, the people will follow.

You can find out more about the World Council of Churches’ World Week for Peace in Palestine and Israel at the Pax Christi UK website here. You can also take action by signing this petition to bring down the illegal separation barrier.

You can learn more about the effects of Area C restrictions on Palestinian life by reading this UNOCHA Factsheet.

For an in depth analysis of the economic impact of Area C on Palestinian life, you can read the World Bank’s 2013 report here.