Hebron is a city of many names – Hebron, Hevron, Al Khalil – and is of great importance to Christians, Jews and Muslims with the tomb of Abraham, the father of all three monotheistic religions, at its centre. Another name is therefore the City of Abraham.

Despite this seeming unified understanding, Hebron is a divided city. In 1997, the Hebron Accords created areas H1 and H2: H1 being under the control of the Palestinian Authority; and H2 under Israel’s control. H2 includes all five of the Israeli settlements in Hebron centre, all of which are illegal under international law as the Fourth Geneva Convention states that the occupying power “shall not deport or transfer parts of its own civilian population into occupied territory”. This separation prevents the 40,000 Palestinians living in H2 the same rights as the 500 Israeli settlers who are protected by a 1,500-strong army: Palestinians cannot use vehicles inside H2, they are subjected to bag and ID checks on a daily basis, and are harassed by settlers who are religiously and ideologically motivated to inhabit this occupied land.

Hebron is a microcosm of the entire Israeli-Palestinian conflict.

As a result, Shuhada Street, which was previously the main shopping street in the city, is now a ghost town with boarded-up shops, some emblazoned with the Star of David. Since 1997, at least 1,600 shops and businesses have closed down due to restricted access for customers and suppliers. According to the Israeli human rights organisation B’Tselem, more than 1,000 Palestinian homes in H2 – over 40% of the area’s residences – have been abandoned. Previously majestic buildings are left to ruin as the Palestinian families who own them do not have the rights to renovate their homes . 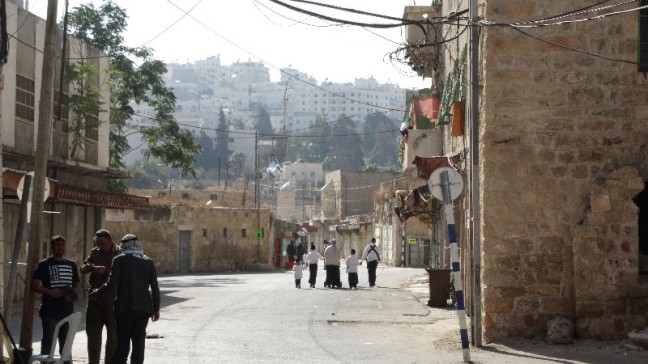 At the age of 77, Mosar Sider has lived on Shuhada Street all of his life and has seen incomprehensible change. Now he says he feels unsafe just to leave his house; even the branches of the palm tree by his front door are regularly cut by settlers. When asked about the role of the EAPPI in Hebron, Mosar said, “we hope you will be here always”. 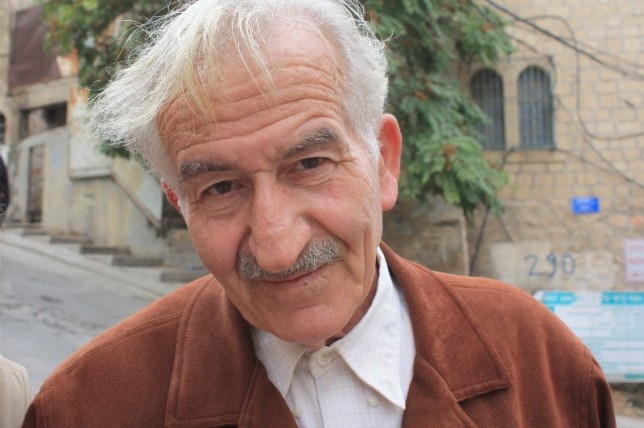 It is along Shuhada Street that over 100 children as young as four years old have to walk each day to Cordoba School. Ecumenical Accompaniers (EAs) in Hebron stand at both ends of the street providing a protective presence as the little ones walk through metal detectors, have their bags searched, and sometimes are narrowly missed by settlers driving dangerously fast. Lamia, the English teacher at Cordoba, said children are less scared going to and from school as a result of the presence of EAs. 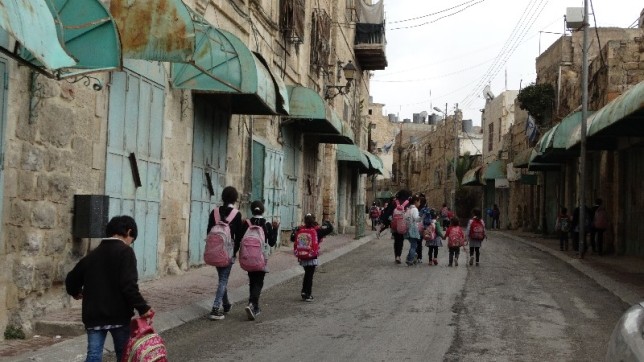 The walk to school along Shuhada Street [Photo: EAPPI/H.Griffiths]

In addition to the 120 physical obstacles deployed by the Israeli military, movement restrictions placed on Palestinians are also enacted through the regular withholding of IDs, particularly of younger men who are perceived as a greater security threat to settlers. EAs document and monitor detentions to ensure detainees are provided with their full rights. Such a task is difficult as Issa Amro, director of the grassroots activist organisation Youth Against Settlements, explained following his recent detention. Israelis, including settlers, live under civilian law whereas Palestinians across the West Bank are under military law. As a result, Palestinians have fewer rights such as access to legal advice when detained or arrested.

As the occupying power, Israel is obligated to ensure that the humanitarian needs of Palestinians living in Hebron are met and that Palestinians are able to exercise their human rights. It is with some irony that Issa reminds us that the government of Israel always says: “this is the only democracy in the Middle East”.