On December 20, 2015 at 1.13 pm I received a text message notifying me of a stabbing incident at Checkpoint 56 in Hebron’s Old City near Shuhada Street. News would soon talk of a 35 year old woman shot with a rubber bullet as she allegedly attempted to stab a soldier, the latest episode of tension between Palestinians and Israelis. “The soldiers do not allow the ambulances to operate, our children are left bleeding until they die. You could be killed just for taking your ID out of your pocket,” a local Palestinian explained to us.

A new wave of confrontations between Palestinians and Israeli forces and settlers began in mid-September in East Jerusalem, later spreading to other areas of occupied Palestine, including Hebron. I moved to Hebron, Al Khalil in Arabic, a few weeks ago. In this short time, in addition to the reports of the deaths of Palestinians and Israelis, I have witnessed grave incidents of violence and discrimination against Palestinians, including the arbitrary closure of streets, schools and businesses, the intimidation of children at checkpoints and the verbal and physical harassment of men accessing places of worship or work. I also heard of curfews, neighbourhood closures and the punitive demolition of homes belonging to relatives of alleged attackers.

International human rights organisations such as Human Rights Watch, B’Tselem and Amnesty International are documenting how the Israeli military and police have resorted to lethal force against Palestinians perceived as posing a threat to life or serious injury, without ensuring that the threat posed was real. In some cases, lethal attacks on the assailants have not ceased even when they clearly could no longer pose a threat.

Israeli law only allows the use of lethal force as a measure of last resort and to counter a threat to life or serious injury. To act contrary to this and carry out extrajudicial killing is unlawful. International law also obliges all military personnel to use non-violent means to deal with a threat before resorting to force, to use restraint and act in proportion to the seriousness of the offense, to give a warning of their intent to use firearms, and give reasonable time for the warning to be observed. International human rights agencies call for the Israeli authorities to end the pattern of unlawful killings. They are also calling on the Israeli authorities to fulfil their obligations under national and international law and ensure that those suspected of carrying out attacks against the public are arrested and tried before a court. 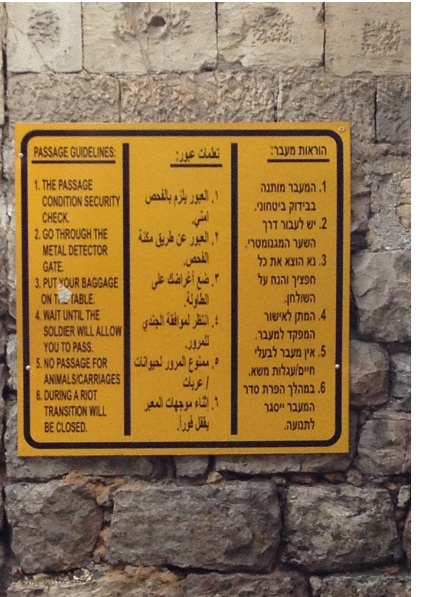 The deliberate lethal attacks by Palestinians on Israeli civilians and military forces must also end. Nobody has the right to take somebody’s life away. A Palestinian human rights defender told me few days after my arrival to Hebron that “there is indeed a general spirit of lack of future prospects leading to a number of attacks. For some it is just khalas (enough), suicide”. This suggests that many of these attacks are carried out because of a lack of hope held for the future, rather than for political or nationalistic reasons.

As noted by the UN Deputy Secretary-General during his briefing to the UN Security Council on October 22, 2015, this crisis would have not taken place “if the Palestinian people had a perspective of hope towards a viable Palestinian state, if they had an economy that provides jobs and opportunities, if they had more control over their security and the legal and administrative processes that define their daily existence – in short, if the Palestinians did not still live under a stifling and humiliating occupation that has lasted almost half a century”. It is important to keep this in mind.