Eidh looking out over the Negev desert across the border in Israel from her home in the occupied West Bank [Photo: EAPPI/I.Morgan]

From Eidh’s tent door you can look across the South Hebron Hills in the occupied West Bank and the stunningly beautiful landscape to the Negev desert in Israel, where she was born into a Bedouin community in about 1940. Her family was semi-nomadic, moving seasonally between defined areas, planting and harvesting crops and herding goats, sheep and camels. The land was held on a traditional basis which was completely respected by the other tribes. “We were the Jahaleen,” she says, “other people knew that that was our land”.

Then came the event which the Palestinians refer to as the Naqba, the ‘Catastrophe’.

“I was just eight years old when we fled. Israeli soldiers killed family members in a nearby village – when we heard this, we were afraid and fled, leaving everything behind. We walked all night and arrived in this place [the South Hebron Hills] late in the afternoon. My father had heard that this was the safest place in Palestine and perhaps he hoped one day to cross the bridge into Jordan.

“My mother rode on a donkey because she was very pregnant with my brother. He was born almost as soon as we got here. She was a clever woman who knew what we would need – just one small bag of grain which she carried on the donkey with her. My father found a spring here at Um Al Kheir. The water from the spring and the bread that my mother managed to bake with the grain was all we had to eat in the first week. My father found a job in Yatta [the nearby town] and his employer gave him food so that we could survive.

“We had lost everything – we had been proud members of the Jahaleen tribe and had come here with nothing. My father had to become a shepherd but he recovered his wealth.”

Here in Um Al Kheir, Eidh married: “I was fifteen and my husband was 40 years old. As was our tradition, I had to make a tent out of goat hair, all by myself, in order to present it to my husband as a dowry. It was very beautiful, with stripes in many colours”. That tent is now her most prized possession and kept securely wrapped; we were not allowed to look at it. Sadly, she may now have to sell it to pay for medical treatment that she needs.

Then in Um Al Kheir, everything changed again for the worse in 1981 when the village was contacted by the Israeli army.

“At first they said they needed to build an army camp. They said to the villagers they needed a good road to connect them to Beersheba [in Israel]. They even gave the people here work constructing the road and as night watchmen to protect the machinery. Then the settlers arrived. They came with caravans, planted trees and started building. The settlement became bigger and bigger.”

Eidh and her husband led the struggle against the settlers, Israelis who had come to live on occupied land in Palestine in violation of international law. 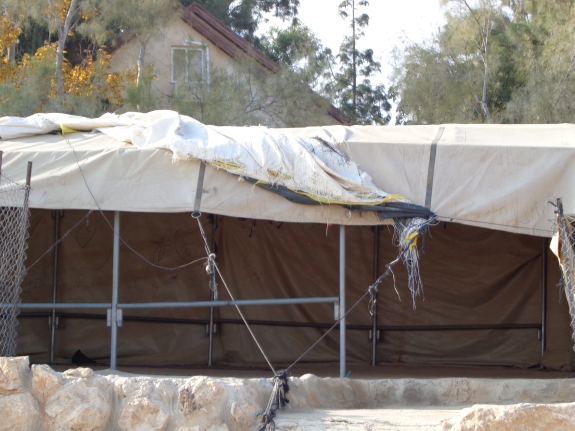 In some places, the settlement comes this close to the villagers’ tents [Photo: EAPPI/I.Morgan]

“I went to see the DCO [the local Israeli commanding officer] in Hebron.” With her husband staying behind to protect their land it must have taken great courage for a woman with little experience outside her community to go. They succeeded in preventing the illegal settlement from encroaching even further onto their land but could not get it removed. It remains an illegal settlement on Palestinian territory. As Um Al Kheir’s, houses, farm buildings and community facilities have been routinely demolished, the settler village at the other side of the fence has continued to grow and now resembles an established suburb of a middle European town. 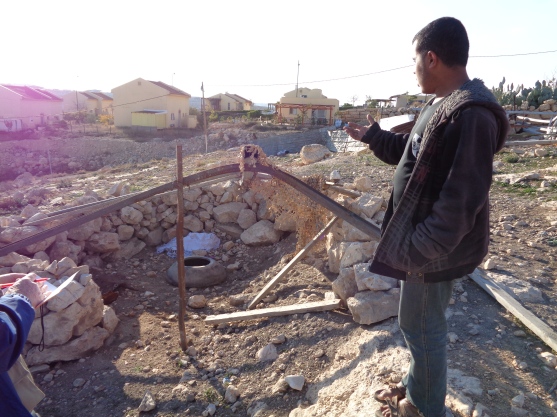 “We have documents to prove our ownership of this land. We bought the land from people in Yatta with the money that my father raised from selling his herds.” Her family have maintained a court action over many years, contesting the seizure of their land and the blocking of grazing rights for their herds.

Eidh tells her story with passion and emphasis. Then she starts to question us – “how would you feel if your government told you that you did not own your land? Is it legal to demolish our houses? Is it legal to impose a second catastrophe on my people?”.