You can see it in their eyes

It was only recently that movement to and from Ramallah, the political and economic centre of Palestine, was severely restricted after a shooting attack that wounded three Israeli soldiers. Checkpoints were shut down, preventing tens of thousands of Palestinians from entering or exiting the city. This is collective punishment, in clear violation of Article 33 of the Fourth Geneva Convention and Article 50 of the Hague Regulations, and an unnecessary disruption of daily civilian life.

When people are treated inhumanely and they feel so much trapped in ‘cages’ and surrounded by concrete walls, there is often that temptation to resort to violence. This is most recently borne by a reminder from the UN Secretary General, Ban Ki-Moon, when he said that:

Not all checkpoints, however, are places of physical conflict though a checkpoint by its very existence is a serious violation of international law, freedom of movement, human dignity and respect. These are rights enshrined in Article 13 of the Universal Declaration on Human Rights and Article 12 of the International Covenant on Civil and Political Rights.

Checkpoint 300 between Bethlehem and Jerusalem in the early hours of the morning. The checkpoint is flanked on either side by the high walls of the Israeli Separation Barrier [Photo: EAPPI/A.Lie]

Checkpoint 300 (also known as CP Gilo, suggesting clearly the proximity of the large illegal Israeli settlement just north of the CP gate!) clearly demarcates Bethlehem from Jerusalem. Coach loads of Israeli and international tourists come and go on the main access road between these two historical cities without having to pass through the checkpoint, seemingly unaware of what life is actually like for countless Palestinians under occupation.

The Israeli ‘Separation Barrier’ hampers the movement of thousands of Palestinians who used to move freely between Jerusalem and other parts of the West Bank till about the early 2000s, the start of the second Palestinian uprising, or “Intifada”. In 2004, the International Court of Justice declared the path of the barrier – 80% of which has been built on Palestinian land – to be illegal. Yet it is relentlessly extended daily, cutting deep into Palestinian land in places such as the Bir-Ouna area of Beit Jala and Cremisan Valley (as widely reported in the past year) to the west of Bethlehem. Israel considers this annexed land part of what they call the Greater Jerusalem urban settler development.

Monitoring of CP 300 is one of the Bethlehem Team’s regular duties. Enduring images are of the scramble at the main entrance, the surge (lots of intense pushing, shoving and bone-breaking squeezing!) into the Main Lane especially between 4:30 – 6:30 in the morning when men and women are trying to get to work, and the desperate cutting of queues by those worried about being late. 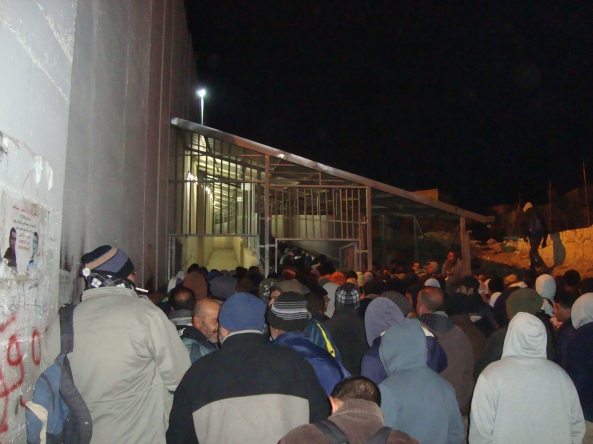 Palestinian workers starting to crowd at the entrance of Bethlehem’s CP300 at 4am [Photo: EAPPI/A.Lie] 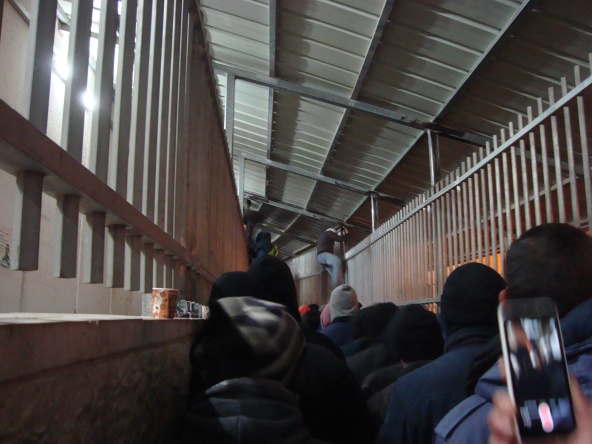 The scramble in the Main Lane queue begins soon after 4am as some workers worried about getting to work on time try to jump the queue [Photo: EAPPI/A.Lie]

An Israeli soldier with authority checking IDs and permits in the Exit Lane [Photo: EAPPI/A.Lie]

During my time here, I have never seen the checkpoint’s Humanitarian Lane (for women and children, and older men usually above 60) open despite repeated phone-calls by EAs to the Israeli military hotline in the early hours. The Exit Lane effectively serves as the Humanitarian Lane, but only when a soldier with the authority to check IDs and permits is there; more often than not there is a long wait. It’s difficult to appreciate fully the indignity of checkpoint crossings unless you are there physically. Some foreign delegations have had such an experience guided by EAs on duty.

The hands of a man waiting in the Exit Lane [Photo: EAPPI/A.Lie]

Imagine the congestion when only two security metal detectors are operating and only 6 or 8 of the 12 ID booths are open. Imagine, too, what it’s like for a worker leaving his thumb impression at a security booth when it doesn’t register because rough manual work could over time erode one’s thumbprint, thereby making identification a little more difficult, time-consuming and queue building. Imagine also that it could take as long as an hour and 15 minutes (as I experienced once in January) to get through the entire checkpoint terminal on a very busy morning with only the Main Lane open. Imagine that at the busiest half-hour period as many as 1300 people could cross the first turnstile at the end of the 150-metre first stage of the Main Lane!

Yet in the midst of all this humiliating experience, I have found the workers to be mostly good-natured and at times good-humoured. It demonstrates their resilience where, for five days a week, month after month, year after year, they have to endure such an unnecessary experience so as to cross ‘to the other side’ (meaning Israel) to maintain a livelihood for the sake of their families and themselves.