Round the houses of Shuhada Street

“Until when?” Shouts the girl down the stairs at the soldiers standing defiantly at the checkpoint below. “But I live just here…”.  She points at the houses nearby. The soldier shouts again that without a permit she cannot get through. “Shut the gate!” are his final words. She gives up, and obediently closes the gate leading to the checkpoint. The young man she is with mutters angrily as she urges him away. To get to university and work, they must literally go round the houses. 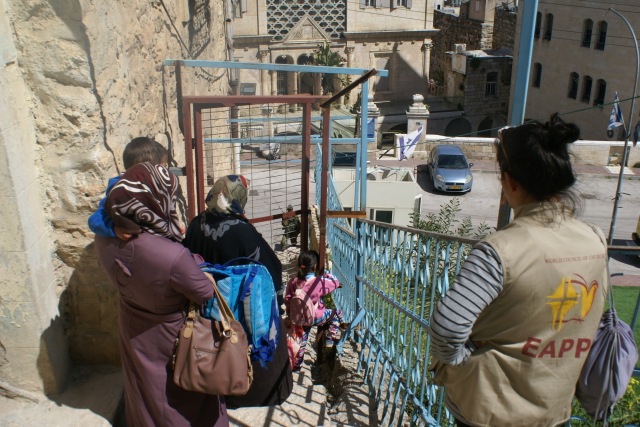 Women and children trying to negotiate a passage through the gate leading to the Closed Military Zone.  The building in the background is one of Hebron’s illegal settlements [Photo: EAPPI/A.Haywood]

Their usual route –through part of Shuhada street in Hebron’s Old City – has been a Closed Military Zone (CMZ) since November 1, 2015, following an upsurge in violence that has claimed the lives of 27 Israelis and 211 Palestinians. Hebron’s Old City has been under Israeli military control since 1997, when an agreement, intended to be temporary, divided control of the city between the Palestinian Authority and Israel.

“It has always been bad, but since last October it is very bad,” Nisreen Azzeh tells EAPPI.  She lives in the Tel Rumeida area just off Shuhada street, also part of the CMZ. Only Palestinians resident within the zone, and schoolchildren and teachers at the local school are permitted to pass through. Residents receive numbers that they must show as they enter and exit. Nisreen shows us two numbers on her ID card, for the different checkpoints at the top and bottom of the hill.

Schoolchildren and teachers gather at Checkpoint 56, after which the Closed Military Zone begins [Photo: EAPPI/A.Haywood]

“I can’t have visitors; not even my family. It is like a jail,” she tells us. If Nisreen ever needed visitors, it is now. Her husband Hashem died last October. “No ambulance came,” she says. Even before the CMZ, Palestinian vehicles were not allowed on the street. The Israeli ambulance service didn’t come either. In the end, she says, Hashem had to go through the military checkpoint near their house and into the Palestinian Authority governed area to get medical help, but it was too late.

Nisreen’s five-year-old daughter is beside her on the couch, singing along to Rihanna’s song ‘Diamonds’. Her singing belies her difficult childhood. Within 200 square metres  of their house they have to contend with both Israeli settlers and soldiers.  “To get to school, one of my children has to go through the military checkpoint, another has to go past the settlers,” Nisreen says.

Some of the settlers Nisreen is referring to live in the orange prefab that looms over the Azzeh’s 19th-century stone house. They have an ideological mission to occupy what they believe is biblical Hebron and have cut down the Azzehs’ fruit trees a number of times, and thrown stones down at their house and garden. 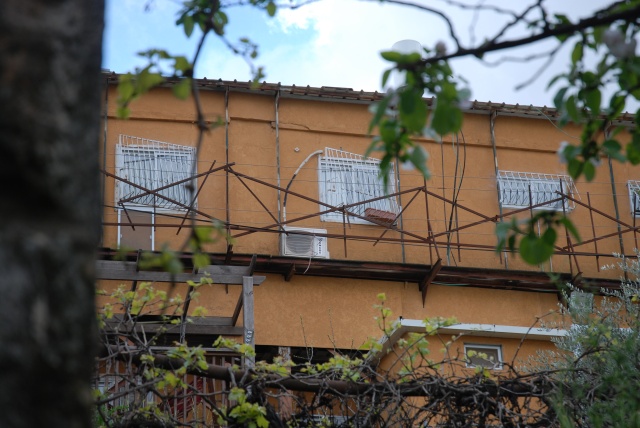 The illegal settlement above the Azzeh home [Photo: EAPPI/K.Sundvall]

Five minutes away, where Nisreen’s son goes to school, is another settlement. When tensions rise, settlers from here harass –sometimes violently- the schoolchildren. All of these settlements are illegal under international law. The Fourth Geneva Convention, applicable during military occupation,  states that the occupying power “shall not deport or transfer parts of its own civilian population into occupied territory”.

Heavy restrictions are nothing new for the residents of the area. Checkpoints and closures in place since 1994, following a massacre by an extremist Israeli settler which claimed the lives of 29 Muslim worshippers at the city’s Ibrahimi mosque, have taken their toll.  An estimated 1,000 Palestinians have abandoned their homes in the Old City since that time. 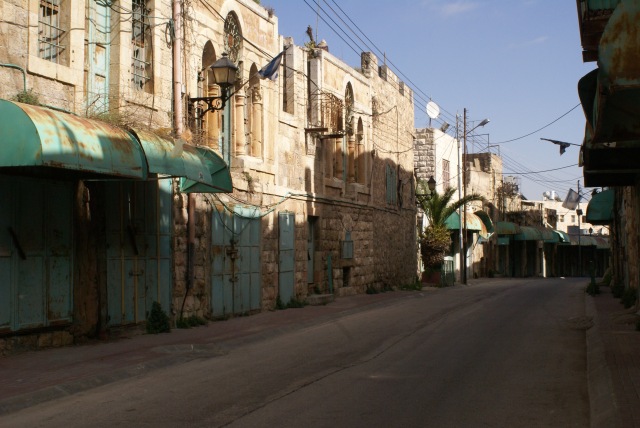 The boarded up homes of Shuhada Street [Photo: EAPPI/A.Haywood]

The remaining residents of Tel Rumeida and Shuhada street fear the CMZ is another attempt to pressure them to move, allowing settlers to take over the area. The latest military order extends the zone until May 15, a day which is also significant because it marks the Nakba – or catastrophe – day in 1948, when about 700,000 Palestinians fled their homes during the war that followed the establishment of the State of Israel.

When asked what Nakba day means in Hebron, Issa Amro of local activist organisation Youth Against Settlements (YAS) tells us, “Palestinians are still being forced from their homes. Every day in Occupied Hebron is Nakba Day”. May 7 sees the launch of #OpentheZone, a campaign led by YAS calling for the Closed Military Zone to end. But the end of the CMZ is not the end of the road. Issa Amro is clear: “What needs to end is the occupation.”

Take action to end the Israeli occupation of Palestine. You can find out more information on the EAPPI UK & Ireland website.