Earlier this week, on 11-12 May, Israel marked its Independence Day, celebrating the declaration of the establishment of the State of Israel in 1948. A less recognised event, but one that affects more than 20% of Israel’s 8 million citizens, who are Palestinian-Israelis, and millions of Palestinians living in occupied Palestine and around the world, is held on 15 May. Known as Nakba – or catastrophe – Day, it remembers Palestinians who were killed, expelled, or fled from their homes and villages during the violence that directly preceded and followed Israel’s establishment. More than 700,000 became refugees during the Nakba. Sixty-eight years later, almost six million of them and their descendants are now registered refugees living around the world, many of them in United Nations (UN) administered refugee camps in the occupied West Bank, Gaza, Lebanon, Jordan and Syria. A 2011 Israeli law criminalised the provision of financial support for activities commemorating Israel’s independence as the Nakba.

Eighty-year-old Mahmoud Hasania, his children and grandchildren live in the UN refugee camp of Al Arroub, in Hebron Governorate in the occupied West Bank. The camp houses refugees originally from over 33 villages in what is now Israel. According to UN statistics, nearly 10,000 people now live in the cramped camp which has a population density of 50,000/km squared, ten times that of London. 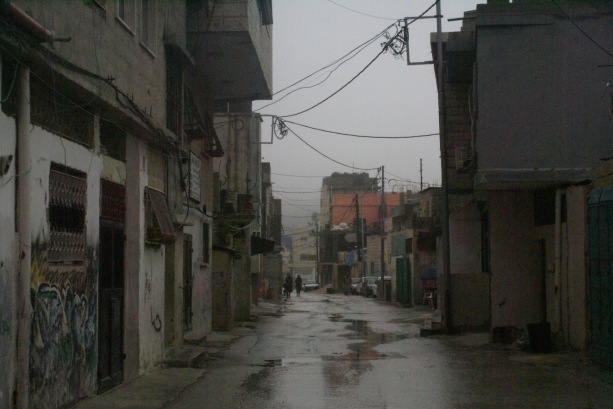 Mahmoud used to live about 50km away, in a village called Kudna. Kudna no longer exists; it is now within Israel. All that remains is the debris of houses covered by wild vegetation.

Mahmoud says he remembers every tree, stone and metre of Kudna. “It was 12km from west to east, and 8km from north to south. There were about 450 people living there. We lived from the land, farming and keeping sheep.” 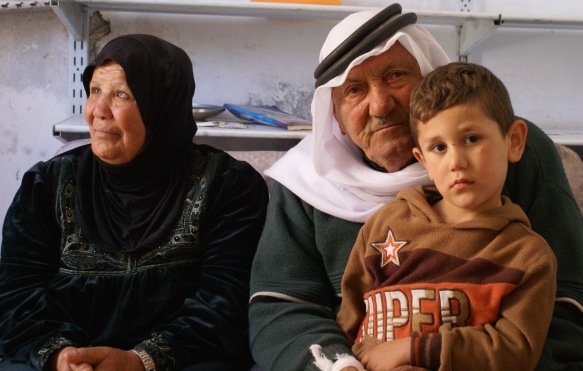 Mahmoud, his wife and one of his grandchildren [Photo: EAPPI/A.Haywood]

In October 1948, the Israeli army entered Kudna and the residents were expelled. “They told us to leave,” says Mahmoud. “The Egyptian army was there before. They left and the people got scared about what would happen. We left at midday.” Mahmoud was 11 years old at the time.

For the next three years, Mahmoud and his family moved around different villages in the West Bank, before coming to live in Al Arroub camp. Once there, they lived in tents for ten years. By that time the family had no sheep anymore. They worked across the border in Jordan instead, for little pay. When asked whether his neighbours from Kudna were also in the camp, he tells us no, Kudna was divided. His old neighbours are scattered around Jordan, Syria and Lebanon.

After ten years, the UN began to build simple houses. But rather than feeling relief at not having to live in tents anymore, Mahmoud says they felt angry. “When we lived in tents, we still had hope that we would return. This camp is not our land. My land is Kudna.”

One of the first houses built by the UN in Al Arroub refugee camp [Photo: EAPPI/A.Haywood]

Mahmoud has seven children. He took his sons to visit Kudna before the first intifada in the late 1980s, when it was easier to travel there. “I told them ‘this is our land’. Our house was not there anymore. The bulldozers destroyed everything.”

When we ask Mahmoud if there is suffering, he looks indignant. “Is that a real question? I live without land. Whoever does not have land, does not have dignity.”

Life in the camp today is hard. According to the UN, it suffers the most incursions by the Israeli army of all refugee camps in the occupied West Bank, with frequent protests, clashes and arrests, including of children. All of Mahmoud’s male children have been arrested. The same day we meet another family in the camp whose 15-year old son was shot dead by a sniper during a protest, and whose 13-year old son bears a large scar on his forehead caused by a rubber bullet. 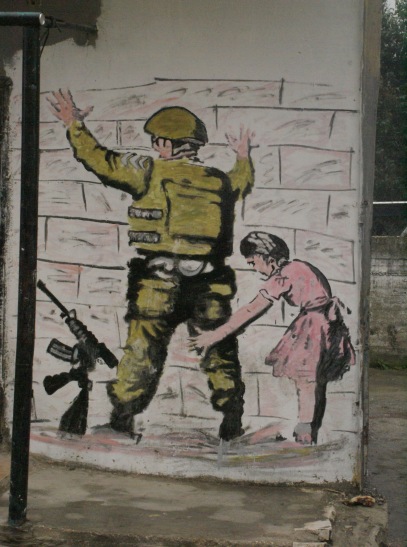 Graffiti by the British artist Banksy in Al Arroub refugee camp inverting the experience of Israeli soldiers that many young people in the camp have [Photo: EAPPI/A.Haywood]

We ask Mahmoud whether he has a message for Europeans. He does not hesitate.

“Britain must stand by us against this occupation. The British gave away our land: how could they give away a land that is not theirs? Until now Britain and the other European countries sell weapons to Israel. Even the tear gas we smell is from the Europeans.”

Read: visit the website of the Israeli organisation Zochrot to learn more about what happened during the Nakba and its ongoing impact.

Watch: next year marks the 100th anniversary since the Balfour Declaration, which paved the way for the establishment of Israel in what was then British-mandate Palestine. Watch the Balfour Project’s short film (20 minutes) highlighting the history of Britain’s involvement in the Israeli-Palestinian conflict, and raise awareness of it among your networks.