At Jerusalem Central Bus station there are soldiers everywhere. Young conscripts, who make up the bulk of the Israeli military, are catching buses for home leave or returning to their units for further service. They call greetings and farewells, and snatch food from one of the snack bars, which will shoot a hummus-laden pitta or beefburger across the counter in just a few seconds. Some are burdened by backpacks almost as big as they are; coloured berets and bright sleeve badges identify units.

It’s a powerful picture of youthful energy, illustrating Israeli society’s determination to maintain itself.  It offers an impression of universal service in the army as a potent, unifying force. But Sahar Vardi, a young Jewish Israeli woman who refused conscription, gives us a more complex picture. From a left-leaning Zionist household, she judged at 18 that the army’s role in sustaining the occupation of the West Bank was unacceptable to her, and she refused to serve. In Israel, the right to conscientious objection is permitted, but only on narrow religious grounds, not for what are seen as political reasons. Sahar’s refusal to be called up led to her arrest and imprisonment. Her release allowed time at home before another arrest, detention and release – a pattern repeated over and over again, with each period of incarceration and freedom having an unknowable and unpredictable length. Finally this put Sahar in a such a state of anxiety and depression that it resulted in her exemption from service on mental health grounds – grounds that exclude some 12 per cent of those who are conscripted. 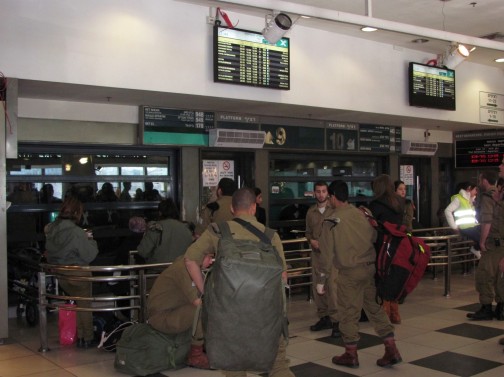 Military service may be avoided for various reasons. Conscripts are paid just 500 shekels – roughly £100 – a month, and for poor families the loss of a young person’s wage causes real hardship. Consequently, desertion by conscripts who need paid work to support their family is not uncommon. Religious Haredi Jews can claim exemption to continue religious study, initially for six months but with the exemption often renewed. Married women can also claim exemption, so it is not unheard of for people to get married as military service approaches (and for divorces to follow once exemption has been attained). For a variety of reasons around 40 per cent of Israeli Jewish women avoid service.

Avoiding service comes with a cost. Israeli law prohibits detailed questioning about army service in job interviews but, as Sahar told us, a gap in a CV makes explicit questions unnecessary. Job advertisements still sometimes require full military service, and scarce housing can be made available only to those who have served. This has consequences for those 18 per cent of Israelis who are Christian or Muslim by faith. Almost no Christians or Muslims enter the army  – although the government is increasingly pressuring Christians to do so – and they too pay the cost by having fewer opportunities for employment and housing.

The armed services function as a powerful force in the lives of many young Jewish Israelis. Most will have been visited in their schools by soldiers briefing them on their life as conscripts, encouraging them to sign up for a particular branch of the service. The allocation system tends to group characters of like mind and background together, so the Border Police has a preponderance of Israelis of Russian origin, for example. According to Sahar Vardi, connections made during military service may endure into later civilian life and so, ironically, it is possible that this unifying experience can also embed and deepen the divided nature of Israeli society.

See the website of the Jewish Israeli group ‘New Profile’, which works against the militarisation of Israeli society, at www.newprofile.org.

Read Sahar Vardi’s statement as to why she refused military service.