This is how it is: Qalandiya checkpoint

This is how it is. You enter the Qalandiya checkpoint through a waiting area that contains a few broken benches and a lot of litter. There is a toilet, but it looks and smells disgusting. You join one of three queues and, moving forward, enter a narrow wire-fenced corridor leading to a tall turnstile. This is controlled by soldiers inside a security booth, who release the mechanism every few minutes to allow people through. If you are unlucky, when the mechanism is locked you can be trapped inside the turnstile.

Inside turnstyle at Qalandiya checkpoint Photo:EAPPI/Dave

Once through, people run around a long barrier to join one of five more queues. At the front is a moving belt and an X-ray machine. This is just like airport security, as is the X-ray frame you pass through. But, unlike at airports, there is nobody to help if the red light flashes – you just have to try again.

Next you stand in front of a dirty acrylic glass opening and hold your permit (or passport) against it. The soldiers on the other side sometimes shout instructions, which are often in Hebrew and are always difficult to hear. If allowed, you continue to the final turnstiles. At this point, in order to get out as quickly as possible, people are still re-organising their possessions. Men, for example, are putting their trouser belts back on. 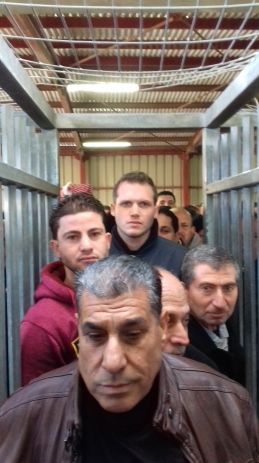 On a good day, all this can be over in 15 minutes; on other days it can take over an hour. However long it takes, it can be a frightening and humiliating experience. And this is the daily experience of people, mostly men, who get to the Qalandiya checkpoint as early as 4.30 a.m. to be sure of getting to work in Jerusalem on time. Later in the day it is also the experience of, for example, students on their way home from university in Ramallah. 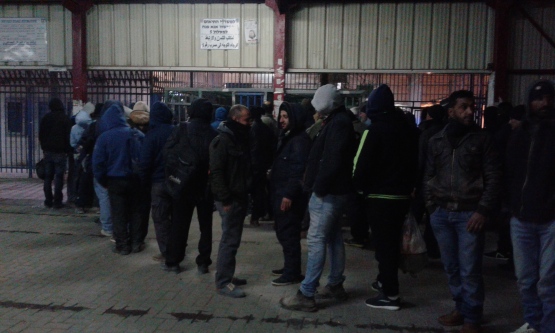 Waiting at Qalandiya checkpoint in the cold early morning Photo:EAPPI/Sarah

Ecumenical Accompaniers in the East Jerusalem team provide a protective presence at this checkpoint early in the morning on three days each week. Saying “Hello” or “Marhaba” to those who have just come through the checkpoint often brings a beautiful smile to their faces. To watch men come through and then immediately kneel in groups to pray on the cold, damp concrete is a humbling sight.

Inside the checkpoint, one of our tasks is to monitor the ‘humanitarian gate’ (where, for example, people going to hospital in Jerusalem should be allowed through). If it is not open we report this to a hotline staffed by the Civil Administration and the Israeli Defence Forces. We also monitor the length of time it takes for people to get through the checkpoint.

Sometimes when difficulties occur we are powerless to help; often people are refused entry with no explanation given. There are ‘blacklists’ and you can be on them without knowing why. Sometimes we can give advice, or seek help from other organisations such as the Israeli peace group Machsom Watch (or Checkpoint Watch). And sometimes just being there is enough for people – people who rely on us to tell the rest of the world how they suffer. 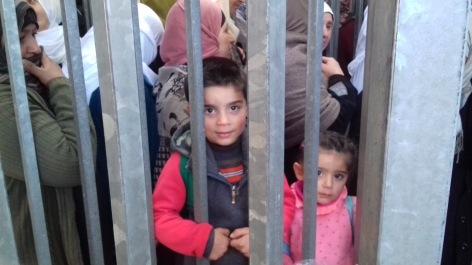 The Qalandiya checkpoint is a consequence of Israel’s separation barrier, work on which began in 2002. The Israeli government argued that it was necessary because of the fear generated by Palestinian militant activity, specifically suicide bombings, against civilians. In 2004 the International Court of Justice advised that “the construction of the wall… and its associated regime, are contrary to international law”. This is because the barrier is not entirely inside Israel – it enters the West Bank to incorporate, for example, Israeli settlements.

On 25 November 2016, Israeli soldiers shot and killed Jihad Khalil, aged 48, at the Qalandiya checkpoint. Eyewitnesses said he bled to death after the soldiers prevented Palestinian medics from approaching him. The soldiers said he tried to stab them. No Israeli soldier was injured (source: United Nations Office for the Coordination of Humanitarian Affairs).

You can read more about Qalandiya here.