The outpost of Mitzpe Yair, a small collection of unauthorised residential units occupied by Israeli settlers, illegal under international law, stands silent and ghostly on the hill top.  Three army jeeps arrive and take position; we raise a hand in greeting to the dozen or so heavily-armed soldiers who stare blankly at us.

Suddenly we spot movement in the distance and all eyes are trained on the rocky hillcrest of Umm Al Ar’ais. Twenty boys and girls aged 3 years and upwards, tumble down, singing and talking happily as they make their way into the valley. It’s Saturday morning and it’s football practice, Occupation-style. 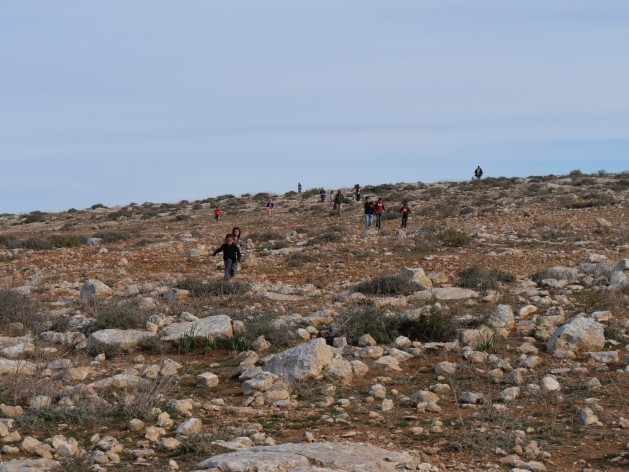 The makeshift playing field is part of a large swathe of fertile agricultural land seized from Sa’id ‘Awad and his family initially by Israel as State Lands in the 1980s and subsequently used for the expansion of Susya settlement and the development of Mitzpe Yair, in direct contravention of Article 49 of the Fourth Geneva Convention. The weekly kick-about, fueled by hot drinks made on an open fire, is one of numerous ingenious non-violent protests that the indefatigable Sa’id has come up with over the years to assert his right to access his land.

EAs from the South Hebron Hills team go along every week to support this peaceful event by providing protective presence. This is the idea that by simply being visible, international monitors, we can help deter violence or human rights abuses from occurring. We are invariably joined by volunteers from peace activist group Ta’ayush, many of whom are Israelis who make a long car journey from Jerusalem or Tel Aviv every Saturday, an extraordinary commitment.

I strike up a conversation with one, Yigal Bronner, on the sidelines. Yigal is Professor of Sanskrit Poetry at the Hebrew University of Jerusalem and has been an active volunteer with Ta’ayush for over 15 years. He tells me about a recent piece he has written ‘Kafka in Area C’ on the issue of land seizure.

In conversation, he confirms that the presence of the army, the peace activists and the international monitors does not necessarily deter the Mitzpe Yair settlers from coming down the hill to harass and intimidate the adults and children on the playing field. Whilst there has been significant trouble in recent weeks, happily all is quiet today.

When I ask Yigal what motivates him to give up his Saturdays, he talks about the ‘brilliant brave resistance’ of the dispossessed Palestinians and his civic obligation as an Israeli to support such peaceful actions to reaffirm their claim to the land. We agree that the beauty of this particular initiative lies in its simplicity; the sight of children kicking a ball around on the weekend is something that would likely resonate with anyone.

He shoots, she scores

The football game continues. Everyone has a turn on the playing field; boys and girls alike. EAs and Ta’ayush volunteers are regularly encouraged into the game and our variable performance causes much merriment.

The soldiers look on. Relations are cordial, almost friendly. An officer pats a little girl on the head, his gun carefully slung over his back rather than in her full vision. Is this a sign of hope? Or is it incongruous, bitter-sweet, given that on another day, the soldiers may be ordered to take a very different, more aggressive approach, as I have witnessed elsewhere during my three months in the West Bank?

All too soon, it’s time to pack up and go home for another week. The army vehicles move off, the settlement remains silent, and we head back over the hill, reinvigorated by this peaceful interlude in the daily grind of life under Occupation.