Everything has another use: Recycling Palestinian style

The Israeli military occupation of the West Bank affects the lives of Palestinians in a host of different ways. Resources such as water, gas and electricity are provided at a premium and supply is often intermittent. (The average water consumption per person is 40 litres per day, well below the 100 litres per day recommended by the World Health Organisation). Added to this there is little regular employment available.

In the south Hebron hills south of Yatta, the people are poor. In the Hebron area 45% of the population are registered as participating in the workforce, of this group 79.7% are employed.  (2013 State of Palestine Central Bureau of Statistics – Labour force survey), and houses rudimentary. This is not because the villagers don’t wish to develop their homes, but because planning permission is only very rarely granted to the Palestinians living in this area, which is known as Area C. 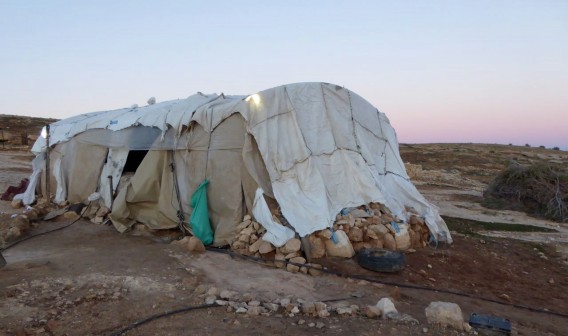 Plastic sacking used to carry grain or gravel are used to create tents for the villagers living under threat of demolition. [Photo: EAPPI/Chris]

The West Bank was divided into Areas A, B and C, in 1993, during the Oslo Accords, with Areas A and B encapsulating the more densely populated areas. Area C, marking the remainder and comprising some 60% of the West Bank. While the PA has majority control over Area A and many aspects of Area B, in Area C Israel has retained almost complete control, including security and all land-related civil matters, including land allocation, planning permission and construction, and infrastructure.

Between 2010 and 2014 Palestinians submitted 2,020 applications for building permits in Area C of these only 33 were successful according to Israeli Civil Administration Data as reported by OCHAopt). Palestinians who build despite not gaining planning permission face the likelihood of demolitions orders. These are placed on any structure, be it as small as a  bread oven, or as substantial as a house and can be enacted at any point – months or years after the authorities have issued them.

To cope with this situation the Palestinians employ ingenuity and endurance to re-use and re-work everything: plastic bottles, broken cars, refrigerators, metal from destroyed buildings… everything has another potential use, another life. 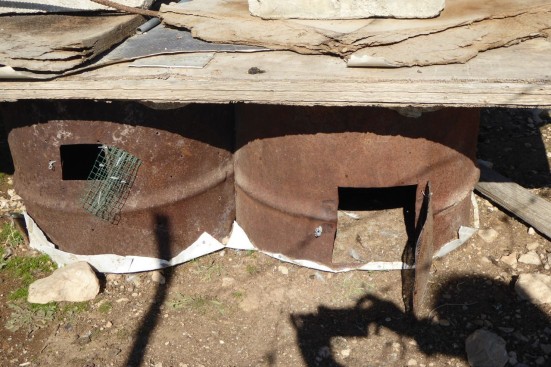 Unsurprisingly the olive, fruit of occupied Palestine’s emblematic tree, is at the centre of a process in which nothing is wasted. The olives themselves give oil, the leaves and twigs released in the washing of the olives are fed to goats, crushed pits are used to mulch the soil around the olives, and the fallen shrunken olives are converted into soap.

The most ingenious recycling activity to date has to be that of Eid Suleiman Hadaleen who lives in the village of Umm al-Khair in the south Hebron hills. He has taken art to new heights with his miniature models, Jeeps, bulldozers, helicopters and tractors. He creates models from plastic, iron and metal and other materials collected from the remains of building destruction in his village (https://eidworkshop.wordpress.com).

With sad irony he recreates in miniature the vehicles carrying out the destruction of his village from the remains of the demolition. There have been 15 structures including houses, a community centre and an oven demolished in the village in the last 3 years.

“Sumud”, the Arabic word for steadfast perseverance, characterises Palestinians in the West Bank. The Palestinian community is not defeated by poverty and scarce resources, but strengthened in the hope that it will continue to be able to stay on its land and thrive.

Please take action today to halt the systematic destruction of Palestinian homes. As the occupying power, Israel is bound by International Humanitarian Law to protect the Palestinian civilian population and to administer the territory for their benefit. International law prohibits the destruction of private property and the forced transfer or displacement of civilians.

Contact your elected representatives and your foreign minister and ask them to urge the Government of Israel to immediately stop demolishing Palestinian structures and to grant Palestinians access to a fair and representative planning system as well as full authority over the planning of their communities in Area C.

Planning to fail – the planning regime in Area C of the West Bank: an international law perspective.  Diakonia 2013