“They knocked down the wrong house”

It is a long drive to the Bedouin village of al Halaweh inside the illegal Israeli military Firing Zone 918. Much of the journey in this part of the West Bank is on dirt roads. Our driver appears uneasy. These roads are not good for his car and without it he has no livelihood. The Israeli military have a base less than one kilometre from al Halaweh and frequent these roads; and we do not want to meet them. As we pass two large cubes of mass concrete our driver declares, “we are now in the Firing Zone”. Despite his misgivings, he agreed to bring us today after the military demolished two houses in the village earlier this month. 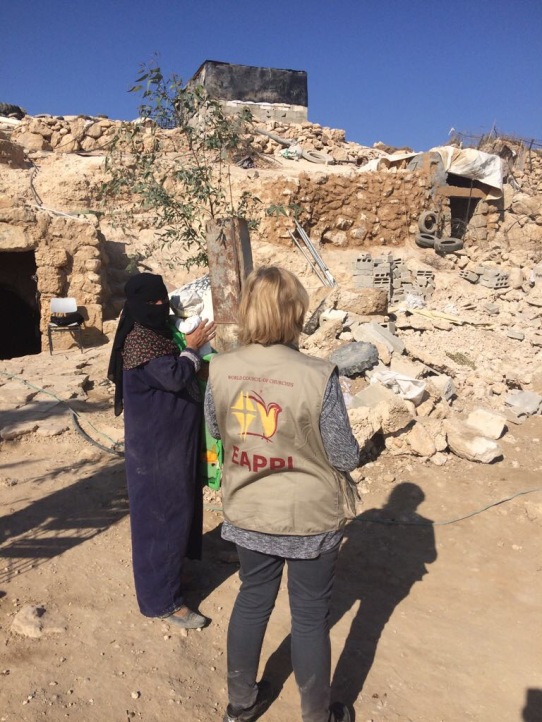 First we meet Hiba, whose family have withstood one of the demolitions. She greets us and welcomes us to take photographs. “The bulldozers arrived at 9am. They gave us half an hour to take out our belongings but it was not long enough”. Her family’s two-roomed house now lies in rubble. Hiba remains calm as she speaks. At her side stands her granddaughter Samar, a beautiful smiling two-year-old girl wearing a ‘Hello Kitty’ top. Somehow Samar’s mother and grandmother manage to create a life of possibility in which this little girl can remain smiling.

Hiba explains that the family of eight comprising three adults and five young girls who lived in the demolished home have now moved into the caves adjacent to the demolition site. The scorpions and snakes found in these caves are a cause of concern as medical treatment is not accessible for those who suffer bites.

Khalid stands in the rubble of his sons’ home [Photo: EAPPI/Hanno]

Khalid meets us at the site of the other demolition. We stand looking at the debris of the home that two of his sons and their families shared. He tells us that a large contingent of armed military in ten cars and two bulldozers working on behalf of the Israeli Civil Administration had given the young families no time to empty their belongings. Armed soldiers forced them from their home and cleared their belongings onto the ground outside. Then the bulldozers did their work. 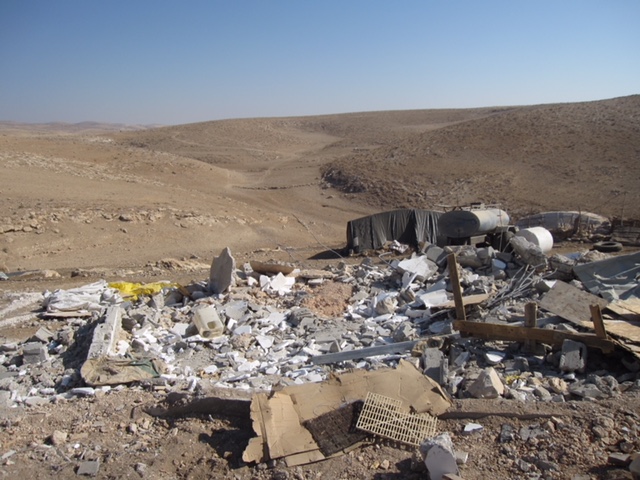 Khalid then turned and pointed to another dwelling higher up the valley. “That was the one that they were supposed to demolish, they knocked down the wrong house”. This revelation is an example of the chaotic regime that Khalid and many Bedouin people endure in their life under occupation. An apology for knocking the incorrect dwelling is not forthcoming, nor compensation. Neither is it expected.

The dwelling that escaped demolition this time [Photo: EAPPI/Lesley]

As a village elder, Khalid is working with a legal team who advise on human rights breaches that the Bedouin people suffer. It turns out Hiba’s home and the dwelling higher up in the valley were covered by a legal injunction not to demolish. All that appears arbitrary now.

As we sit drinking tea Abu Ahmad, a friend from a neighbouring village, arrives to visit Khalid. He comes to give his support but also to find out what is happening and wonders when his village will experience the same fate.

I sit watching the two men, elders in their villages. Their conversation is pragmatic and creates the internal unity that sustains them and their community. I reflect on Samar and her baby sister Dalia, and wonder at the grace and determination of the Bedouin people of al Halaweh who continue to welcome the stranger and love their neighbours in the face of constant adversity.

The destruction or demolition of private and public property by the Occupying Power is prohibited under Articles 53 and 147 of the Fourth Geneva Convention and under Article 23 of the 1907 Hague Regulations, unless absolutely necessary for military operations.