Checkpoints: “We help these people as we feel we must”

“We help these people as we feel we must” – Hanna Barag

She was one of Machsom Watch’s early members. She is a petite 82 year old with 5 grandchildren and has been an officer in the Israeli army.

Despite her age and diminutive size, she has been abused and threatened for her work monitoring the checkpoints Palestinians have to go through every day: she is attacked on internet sites, which advocate her being banned from the country, soldiers have described her in the most vulgar terms to her face, and recently she was hit by a man in his 40s. From the hills of Palestine the Mediterranean is clearly visible but most Palestinians cannot visit it.

Palestinians must seek prior approval from the Israeli government to travel within occupied Palestine as well as in Israel. Permission is often refused. They need to obtain permits for many of the day-to-day necessities of life, such as; travelling to work, going to a medical appointment, attending school.

Paper inspection at an agricultural gate to the ‘Seam Zone’ Photo [EAPPI A.Dunne]

The latest report from The Applied Research Institute-Jerusalem (ARIJ) noted that there were over 100 types of permits used by the Israeli Civil Administration to control Palestinian movement in several spaces.

Not only must Palestinians obtain permits from the Israeli authorities to enter Israel, but also to travel to other parts of the Palestinian Territories; which makes it difficult or impossible to visit relatives only a few kilometers away.

Palestinians may require permission to travel within their own cities, and to tend their fields and livestock hundreds of metres from their homes.

A Palestinian could need as many as 100 permits during their lifetime. Obtaining these permits is at best complex and time-consuming, at worst impossible. In many cases the Israeli authorities reject the application; and it can often be difficult for the applicant to obtain an explanation why it has been rejected.

Permits and ID cards, which everyone must carry, are checked at the numerous checkpoints between Israel and Palestine, and within Palestine.

These checkpoints vary; some may be huge, industrial throughputs for vehicles and pedestrians entering and exiting Israel, handling thousands of people per day, others are permanent concrete and metal structures only for pedestrians, there are also simple gates in agricultural areas, and “flying checkpoints” that are put up suddenly and without warning between one part of the West Bank and the next.

In Hebron, a city of 200,000 Palestinians and 800 Israeli settlers, deep in Palestinian territory, there are twenty checkpoints in the small central zone of the city. Often checkpoints are closed without warning for an unspecified amount of time.

Even if one can pass through the checkpoints, the process can be intimidating and unpleasant, especially for the women and children of a conservative society. Frequently people with permits are refused passage for explained or unexplained reasons.

In 2001 a group of middle-aged Israeli women, who were concerned about the way Palestinians were being treated, started monitoring checkpoints.

Paper inspection at an agricultural gate to the ‘Seam Zone’ Photo [EAPPI A.Dunne]

These courageous women travel at their own expense, often far from their homes in Israel, and try to provide assistance to Palestinians experiencing problems at the checkpoints, such as; refusal of passage, violence by security personnel, mistreatment of children and the infirm, and harassment.

They seek to encourage the Israeli security personnel to behave appropriately to the Palestinians coming to the checkpoints, to help people who were refused or mistreated, and to refer them to lawyers.

They call themselves “Machsom Watch”, after the Hebrew word for checkpoint. In practical terms they have achieved positive results; such as persuading the authorities to open checkpoints at 4am instead of 7am. In 2005 some of them went one step further and established “Yesh Din”, Hebrew for “There is a law”; which is motivated by the principle that all people are entitled to equal application of the law, regardless of ethnicity.

“My parents would be turning in their graves if they knew what the government is doing now”.

Their positive contribution is not just the practical help they give to ordinary Palestinians, but also the moral example they set; that a modern, democratic country should act fairly and not trample on human rights. 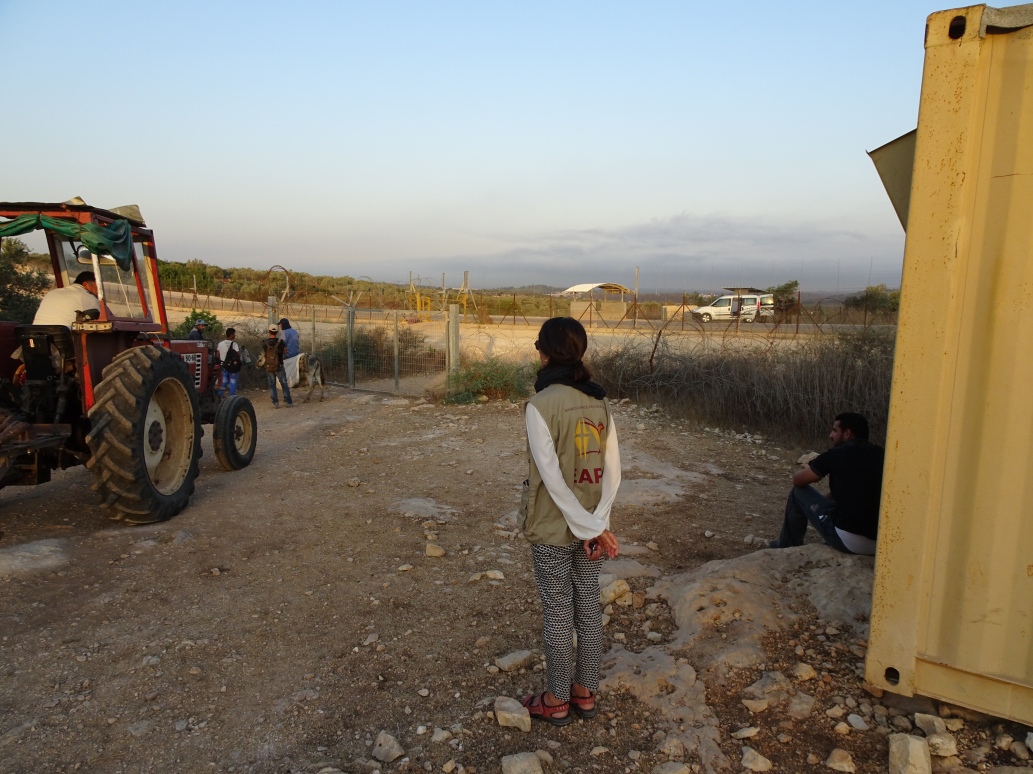 It is clear from talking with them that these are loyal citizens of Israel who are motivated to become involved in a difficult, and potentially dangerous, situation by a strong sense of human decency.

To quote them, they seek an end to “the destructive occupation that harms both Palestinian and Israeli society alike”.

Despite the fact that most are middle-aged and elderly women from mainstream Israeli life, they can experience considerable hostility, vilification and even physical violence.

When we met her she said with respect to the occupation; “ My parents would be turning in their graves if they knew what the government is doing now”.

You can learn more about the work of Machsom Watch by visiting their website.