On Palm Sunday local Ecumenical Accompaniers (EAs) gathered, along with thousands of Christians from all over the world, at the Church of Bethpage. The church sits on the Mount Olives in occupied East Jerusalem. In its courtyard and gardens people danced and sang to live music under a hot sun, waving national flags from The Philippines, France, Czech Republic, Poland, Spain, Russia, and many other countries. Hundreds of Christian Palestinians participated, but their colours were only to be seen on the lapels of the young scouts who would be leading the march down to the Old City walls. There were no Palestinian flags to be seen. At least, not yet. 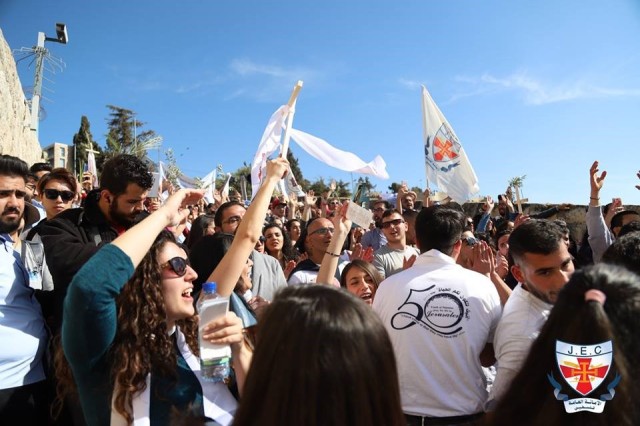 Christian Youth on the Mount of Olives. Photo: JEC

The procession slowly wound out of the church and began its descent towards the Old City’s Lions’ Gate. Just then a Palestinian man ran over to the EAs and said with urgency: “Stay close to the youth”. They were easy to find: the Jerusalem Evangelical Youth (JEC) were chanting and singing raucously, causing the white-haired pilgrims downwind to crane their necks and squint in the sun. The noise was led by a young man in glasses. He walked backwards with his microphone, sweating as he exhorted the crowd to be louder and louder. Triumphant cheers marked the space between songs. Christians are a small, dwindling minority in the Holy Land but as one Palestinian Christian said to me, on Palm Sunday Jerusalem feels like it’s theirs.

As the procession passed down the Mount of Olives, the Christian youth suddenly unfurled Palestinian flags. They had waited for their moment. Pilgrims and journalists leaned in with cameras as the flags were waved above the Old City. The Israeli authorities moved in quickly and violently. Blue-shirted regular police, along with border police in full combat gear, rushed the crowd and began ripping the flags from the hands of the marchers. The Palestinians that did not let go immediately were hit, shoved, and shouted at. Two young girls who had been knocked over in the sudden crush emerged from the crowd in tears. The youth leader in glasses led the crowd in shouting at the police. Ahead, the procession continued as normal, the Filipinos still dancing and singing, oblivious to the anger and commotion behind.

Rafi leading the youth on the Mount of Olives. Photo: JEC

The Israeli police commander and the youth leader in glasses are now face-to-face, but it appears that nobody has been arrested. Not yet anyway. The stand-off is ended by the youth leader reclaiming his microphone, turning to the crowd, and resuming chanting. But it’s louder this time. And the crowd respond, louder still. The procession resumes its progress, all Palestinian flags erased from view.

As we continue down the Mount of Olives, we notice that the youth group is being followed by three Israeli security personnel. They are watching the crowd intently, and making signals to each other and the policemen lining the route. From the start to the finish, the procession is monitored by hundreds of heavily-armed Israeli border police. The three security officers fall into step with us and remain by our sides for the rest of the procession. When we arrive at Lions’ Gate, they make their move: they shoulder their way into the middle of the crowd and emerge with a man in a head-lock. He is bundled into the adjoining Muslim cemetery and the gate is slammed behind him. There are more tears and more anger as the crowd recover from the initial shock of the sudden, violent arrest. The young man who was arrested had earlier carried the biggest Palestinian flag. After being pulled from the crowd at Lions’ Gate, he was taken to a police station. “You are a terrorist,” he was told. “You are carrying a terrorist flag”.

Rafi leading the chanting on the Mount of Olives. Photo: JEC

“He was shocked by that word. ‘Terrorist’ is a big word,” says Rafi Ghattas, as he recounts the incident to me when we sit together two weeks later. Rafi is the youth leader in the glasses. He is 20 years old, with a boyish smile, but speaks with the conviction of a man much older: “Everyone else was able to carry the flag of their nation on Palm Sunday, but not us.” Rafi is a Roman Catholic Palestinian and lives in Beit Hanina in East Jerusalem. He is a student of media at Birzeit University, which may explain this unlikely reaction to being attacked by armed police at a peaceful, religious procession: “I was happy. Tourists and journalists saw the real face of Israel.”

The police reaction this year was the worst Rafi had ever seen: “Usually they wait until we enter the Lions’ Gate and even then, they are taken away more lightly.” Rafi cites President Trump’s embassy announcement as the reason behind this unusual aggression. This view is echoed by other Palestinian civil society actors. They speak of an emboldening effect within the Israeli government since Trump effectively validated Israel’s claim to Jerusalem in its entirety. This is a claim that Rafi rejects: “We are the Christians of the Holy Land. We stand against Israel. This is our land.” Trump’s announcement was met with international condemnation, including from the governments of Ireland and the UK.

“I am not scared,” said Rafi when describing how he felt when arguing with the police. “I am doing absolutely nothing wrong. The policeman is scared of a flag, he is scared of paper.”