We remember the #Palestinian Christians across the #WestBank and #Gaza today, as they practice and celebrate their faith under the shadow of occupation. We remember the denial of their right to freedom of movement and access to worship. May we all take a quiet moment today to think about all of those in the Holy Land. May they soon see a #just #peace, with freedom and dignity for all. Photo caption: The separation barrier and an #Israeliarmy #watchtower next to a church in #Bethlehem, #WestBank. #Christmas #ChristmasDay #Palestine #Israel #EndtheOccupation #NoPeaceWithoutJustice
"The BBC called Palestinian olives ‘perhaps the most political food in the world‘, while Time Magazine called the olive groves ‘a battleground’. Around 100,000 Palestinian families rely on olive trees to provide them with olives, olive oil and olive wood. The trees are a source of nutrition and for many, they are their main source of income. But olive trees are not just a commodity, they also have cultural, historical and symbolic significance." The end of another year and the end of another olive harvest in Palestine. In her latest blog, EA Patricia reflects on Palestine's most abundant crop, its significance for the Palestinian economy and the fight, both symbolic and very real, to keep it alive. Click on the link in our bio to read 'West Bank Olives: one of the most politicised foods in the world' #Palestine #Israel #WestBank #Olives #OliveOil #HumanRights #MiddleEasternFood
Young #Palestinian women in the Bedouin village of Jahalin, #WestBank write about what Palestine means to them #PalestineDay ⠀ ⠀ 'Palestine is my home⠀ Palestine is my heart⠀ Palestine [is an] international country⠀ Palestine is love / lives⠀ Palestine is sweet⠀ Palestine will be free'⠀ ⠀ #InternationaldayofsolidaritywiththePalestinianpeople #UnitedNations #Palestine #Israel #HumanRights #Freedom #PeopleofPalestine #Poetry #MiddleEasternWomen #NonViolence #Resistance #EndtheOccupation
Today on #ChildrensDay, we remember the children of #Palestine and the many, daily challenges they face under military occupation, including harassment, violence, arrest and barriers to education #CRC30 ⠀ #MiddleEast #Palestine #Israel #WestBank #Children #Childhood #Military #IsraeliArmy #IsraelDefenseForce #HumanRights #InternationalLaw #InternationalHumanitarianLaw #PhotoDocumentary #Photography #PeopleofPalestine #HumansofPalestine #ChildrenofPalestine #RighttoEducation
Fayez Taneeb tells EA Ben about life on his sustainable, organic farm in the occupied West Bank. It runs alongside the Separation Barrier and an Israeli chemical factory - considered too dangerous to be built in Israel. Despite the many challenges, Fayez's eco-agriculture has been tremendously successful.⠀ ⠀ "My farm, we want to stay here forever as we have security in producing our own food. As I have said, I have a great wife who always gives me strength. I have also travelled the world a great deal learning more about organic farming and agricultural resistance."⠀ ⠀ "As surprising as it sounds, with the restrictions that the farm faces, it is still able to produce all of its own energy and food. Techniques used at the the farm that allow this to be feasible include chemical-free raised bed horticulture, solar food drying, biogas energy production, local seed collection, trading and storage; an aquaponics installation and solar panel powered energy. Fayez was particularly keen to tell us about his farm’s usage of compost tea ‘it is food for all my plants and helps to create a new energy source’, he added ‘everything is recycled so there is no need to buy anything."⠀ ⠀ "Some of the farms products include tomatoes, cucumbers, peppers, beans and spinach which are all grown inside greenhouses. Lettuce, onions, radish, grapes, cauliflower, asparagus and za’atar (three different kinds) are grown outside. Fayez’s fight has taken him as far afield as the United Nations Human Rights Council in Geneva and he served as a coordinator for the Palestinian Farmers Union for three years. He credits his wife as being the driving force behind his resistance."⠀ ⠀ Read the full blog, 'an Organic Resistance' at eyewitnessblogs.com⠀ ⠀ #Palestine #Israel #WestBank #November #Environment #Organic #EcoFarming #Sustainability #ClimateChange #Resistance #Culture #PhotooftheDay #Photography #Moments #DailyLife #Occupation #EndtheOccupation #Israeliarmy #Freedom #HumanRights #PhotoDocumentary #TravelBlog #HumansofPalestine #PeopleofPalestine #FridayFeeling #nonviolence
@eappiukireland welcome the decision of the @europeanparliament to ensure clear labelling of products which are made in #Israelisettlements. Israeli settlements are illegal under international law. The growth of settlements and the associated #humanrights violations, such as restrictions on #Palestinian #freedomofmovement and settler and military violence and harassment, are a direct obstacle to peace. Consumers have the right to know if they are purchasing products from a region occupied by military force. Photo caption: An activist from Combatants for Peace holds up a banner in a #Jerusalem protest #Palestine #Israel #WestBank #HumanRightsPhotography #activism #nonviolence #directaction #protest #photooftheday #photodocumentary #ThursdayThoughts

The tiny village school in Khirbet Zanuta in the South Hebron Hills has three classrooms for its 17 children. A roof has recently been added, and a further classroom will provide space for a kindergarten for ten children – once a teacher can be found.

Until March 2018 the children of Khirbet Zanuta had to walk 10km to another village for education. But with the support of the Ministry of Education the villagers built their own school. On 10 April 2018 it was demolished by the army, on the grounds that no building permit had been obtained. This is a common issue in Area C of the West Bank, where Israel controls all planning and construction. Fewer than two per cent of Palestinian building applications are granted. The Israeli human rights organisation B’TSelem notes that “without any possibility of receiving a permit and building legally, the needs of a growing population leave Palestinians no choice but to develop their communities and build without permits. This, in turn, forces them to live under the constant threat of seeing their homes and businesses demolished.”

When the school was demolished, much of its furniture was confiscated. The water system was also destroyed.

Through April and May the children were taught in tents provided by the Ministry of Education. These too were demolished, twice.

Over the summer holiday the community rebuilt the school. But the day before the start of the new school year a ‘stop work’ order was issued. This forbids any renovation or development, and is usually the precursor to a full demolition order, which is a written instruction of the Israeli military’s intention to demolish the building. So far, although a building permit has been refused, there is no demolition order. 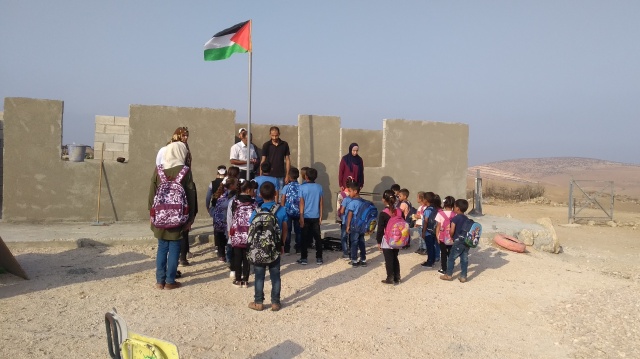 Fatima Slymia is the school’s headteacher. We first met her at the beginning of term. The classrooms had walls but no roof. She said: “We don’t expect to get a building permit, but we will build anyway.” The initial legal advice, however, suggested that any changes to the building would risk immediate demolition. As a temporary measure, teachers stretched tarpaulins over the classrooms to give some protection from the sun. As Fatima said: “Compared with two months ago this school is a palace.”

In late October 2018, we heard that the roof is now in place – with the rainy season coming this could not be further delayed. Urgent funding was found and the villagers can only hope that demolition does not soon follow.

Fatima is optimistic, and determined to fight for the right of these children to an education. She is highly qualified, a graduate of Al-Quds Open University. She has a master’s degree from Al-Quds University in Abu Dis. She is also a university lecturer. Before accepting the post at Zanuta, Fatima refused the headship of a larger school. The journey between her home and the school takes up to an hour, and she is often delayed at checkpoints. She says: “Here I can teach as well as be the head. Here we can change the situation, change the children, make them love education.” She goes on: “We can teach anywhere but the problem with the soldiers is that they prevent us from teaching.”

Fatima Slymia in her office with a tarpaulin roof – EAPPI/Penny

Under Article 28 of the UN Convention on the Rights of the Child – to which Israel is a signatory – every child has the right to education. Article 50 of the Fourth Geneva Convention – which details the duties of an occupying force to the civilian population and to which Israel is a signatory – states that “the occupying power shall… facilitate the proper working of all institutions devoted to the care and education of children.”

Meanwhile, Fatima and four committed teachers, one of whom is part-time, work hard to educate these children despite many difficulties (including a site with no toilets or running water). The site also has a room that should be a clinic for the whole village but, owing to the lack of water, it has not been used, meaning the village must rely on a mobile clinic, which visits twice a week.

Read what the UN has to say about the confiscation of classroom equipment and demolition of classrooms across the West Bank: www.ochaopt.org/content/right-education-1-million-palestinian-children-risk.

Please write to your elected representatives, asking them to take up these issues with the government. Ask the government to challenge Israel to protect the education of all children in occupied Palestine.